KFC's deal to sponsor this year's Rugby League World Cup has been called a coup for the company but a tragedy for public health. 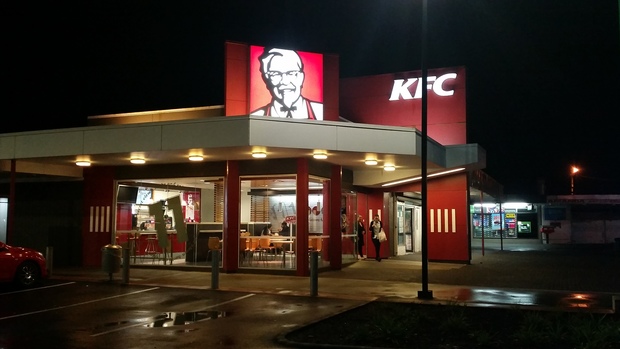 KFC will be allowed to advertise on the video referee board during try referrals and through virtual signs on the field. Photo: RNZ / Joanna MacKenzie

The deal was announced yesterday and has been called a cynical move to get children addicted to fast food.

The Rugby League World Cup will allow KFC to advertise on the video referee board during try referrals and through virtual signs on the field.

The World Cup said it would also work with the chain to create ways for fans to interact with the brand in the lead-up to the games, later this year.

Obesity expert Robyn Toomath said pairing brands like KFC with elite sports was a tragedy for public health and an advertising coup for the chain.

"The bad thing gets elevated into an arena where people think it is a terrific thing."

Despite efforts to curb fast food advertising in schools and hospitals, there was no governmental oversight over what was appropriate at major sporting events, Dr Toomath said.

The "dearth" of local and national government responsibility was concerning, she said.

"We have such a big problem with morbid obesity in New Zealand."

Ministry of Health figures show that New Zealand has the third highest obesity rate in the OECD with one in three people older than 15 obese, and one in 10 children.

"[KFC] is doing it because they want to build up a life-long addiction to their food."

"Rugby league as a game is largely supported by Māori and Pacific Islanders and these children are the children suffering most already."

Ms Chetwin said the industry wanted to be self-regulated but that did not work and there needed to be government intervention.

Sports Minister Jonathan Coleman, who is also Health Minister, said while he understood those views, fast food sponsorship of sport was a reality in New Zealand.

"Many of these events, and I'm talking specifically around grass-roots sport, just wouldn't happen without food and drink sponsorship. And that's the balance you have to achieve, you know, what is the bigger problem?"

Minister for Pacific Peoples Alfred Ngaro wasn't aware of the KFC sponsorship deal and did not want to comment on it directly, but said Pacific people were great supporters of the game.

He said the government put a lot of work into addressing obesity-related diseases such as diabetes.

"I don't think it was a great look for Minister Coleman as the Minister of Health to be supporting a fast food outlet to support a sports programme, because we do have real issues here in New Zealand.

"I would have thought he would have gone the other way on it," Mr Shaw said.

And he said he did not buy Dr Coleman's argument that grass-roots sport would suffer without fast food sponsorship.

"I don't agree with that, I think there are places for sports to get better funding and more appropriate funding," Mr Mitchell said.

A senior lecturer in sports management at Massey University, Rachel Batty, said the sport industry was in a catch-22.

It was very difficult in New Zealand to secure sponsorship, Ms Batty said.

"The fast food industry are willing and able to support events and supply significant amounts of funding."

From a sports management perspective, that was excellent, she said.

But she said the flip side was whether it was the most appropriate sponsor for sporting events.

A New Zealand Rugby League spokesperson said the World Cup was an independent event that required sponsorship to proceed, "and we understand and accept that".

"We know our message is reaching people and that we are having a positive influence."