In a world first, Auckland's harbour bridge is to be decked out with permanent coloured lighting, powered completely by solar energy and batteries. 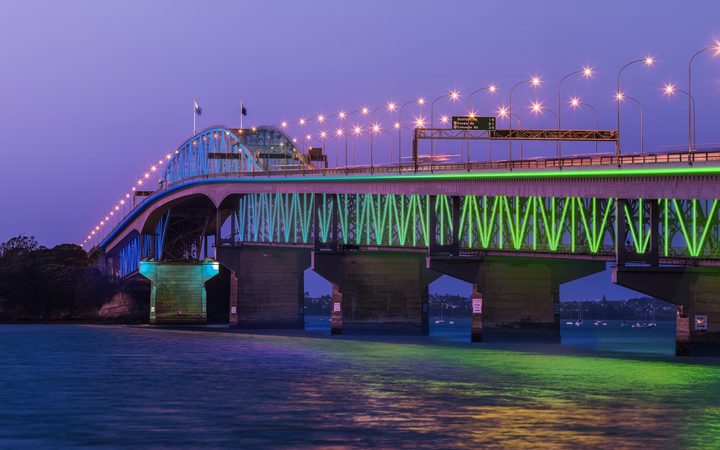 Nearly 90,000 LED lights and 200 floodlights will light up the bridge. Photo: Supplied

The multi-million dollar project is a partnership between Auckland Council and the power company Vector.

The mayor, Phil Goff, said 630 solar panels would be installed to power nearly 90,000 LED lights and 200 floodlights on the bridge.

"I think it will make that really interesting to look at at night, it'll spark some interest amongst visitors and locals alike.

"It's also a very visible symbol of our commitment to energy efficiency, to sustainability and low carbon emission."

Mr Goff said the power company Vector was putting about $10 million towards the project, and the council would spend up to $200,000 each year maintaining the lights.

Vector hopes to finish installing the solar-powered lights by Christmas.

Its chief executive, Simon Mackenzie, said the thousands of lights would be installed at night, to keep traffic delay to a minimum.

"The icon will also be a constant reminder to Aucklanders of the power of a new energy future that's sustainable and efficient and reduces carbon."

In a separate project, the NZ Transport Agency will be replacing the existing road lighting with energy efficient LED lights over the next 18 months.