It is outrageous Child Youth and Family has blanked out a crucial report relating to the death of a boy, his family says.

The boyfriend of the Southland toddler's mother was charged with murdering him in October 2015 but was later found dead in custody.

In late February, RNZ asked Child Youth and Family, since replaced by Oranga Tamariki, for the risk assessment report done by social workers on the boyfriend. 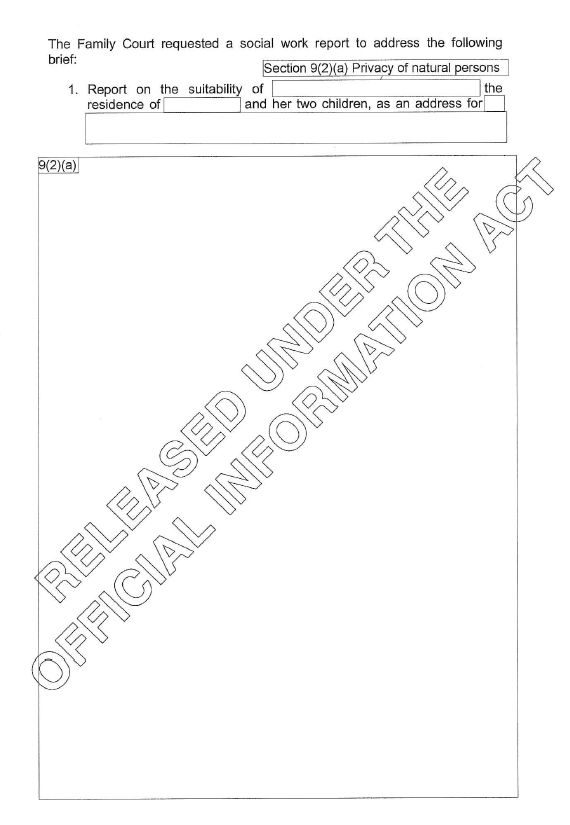 An example of a typical page in the report released to RNZ. Photo: Supplied

The risk assessment persuaded a district court judge to overturn opposition from police and the Corrections Department to allowing the boyfriend back into the family home while he was on bail.

Within days the 3 year old was dead.

The agency has already admitted it did a poor job on the assessment.

CYF asked for more time than the usual four weeks under Official Information Act rules, and in late March it told RNZ it would release the report - in part.

"However, it will take some time to prepare this information for release," it said, and set a new deadline of 27 April.

Yesterday, Oranga Tamariki told RNZ the release was on its way, and that it now had a new policy of fostering more openness with the public.

The four-page assessment has now been released, but is almost completely blanked out.

"This is outrageous," said one of the boy's aunts on his father's side.

"Providing a report that's completely redacted - what use is that?"

Oranga Tamariki has refused to give the aunt's family or RNZ a written copy of its internal review of the case.

The family still has no date for an inquest.

All names and identifying features on Family Court matters have been withheld.