Scientists drilling on the Alpine Fault in the West Coast have discovered some of the most extreme underground conditions on the planet. 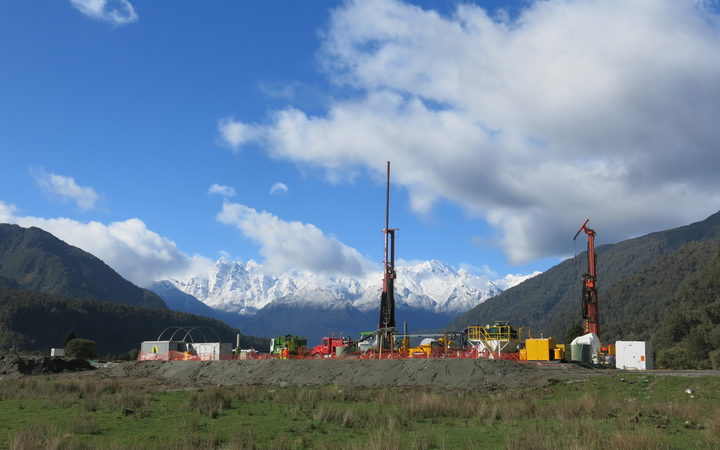 Researchers working on the Westland Deep Fault Drilling Project have drilled nearly 900 metres down into the alpine fault at Whataroa in Westland, looking at how the fault looks and sounds before an earthquake.

The research, lead by Victoria University, GNS and the University of Otago, was published today in the international journal Nature.

Victoria University researcher John Townend, one of the lead scientists on the project, told Nine to Noon 40°C temperatures would be normal at 800 metres below the surface, but the team recorded temperatures three times that - about 120°C.

"It's a very, very warm environment - it's comparable to what you might see in the Taupō volcanic zone for example... but that is a volcanic area, that has got magma sitting close to the earth's surface... and this is really totally non-volcanic," Dr Townend said.

Dr Townend said the heat was caused by the Alpine Fault was a completely different process to the volcanic areas.

"It's the faulting that is producing earthquakes intermittently, that jacks up the Southern Alps and that means it's bringing up this hot rock from depth."

Another of the lead scientists, Victoria University researcher Rupert Sutherland, told Nine to Noon no one on the team predicted it would be that hot so close to the surface.

"This geothermal activity may sound alarming but it is a wonderful scientific finding that could be commercially very significant for New Zealand."

Dr Townend said there could be commercial opportunities from the geothermal resource.

"The potential economic benefits of this remain to be fully explored ... but if you think about some of the big commercial benefits or economic activities on the West Coast - tourism, dairy - these are operations that could benefit from having a source of renewable, sustainable energy produced locally.

"So we would like to do further work to establish what the quality and extent ... of that resource is."

The Alpine Fault is known to rupture in magnitude 8 earthquakes approximately every 300 years.

The borehole that was drilled will be used for further research, including to monitor changes over the years.

'Boost for the West Coast'

Westland mayor Bruce Smith said this potential geothermal resource could help towns that had been struggling due to job losses in traditional industries, such as forestry.

"It would be a boost for the West Coast economy like we haven't seen before," he said.

"There would be so many commercial activities possible," he said.

Mr Smith said the council would start working with businesses who would benefit from the resource if it went ahead.