A sobbing young Belgian woman has told a court she wonders if she's strong enough to face the future after her former boyfriend threatened to kill her and almost drove her off a road into a lake. 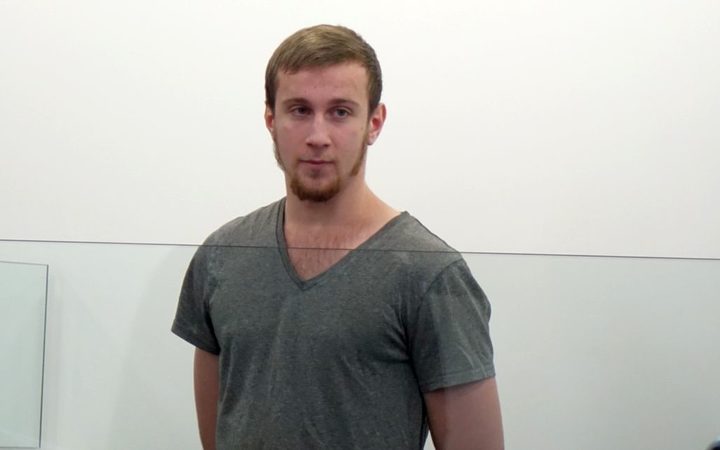 Jan Falke was sentenced to nine months in jail and will be deported on his release. Photo: RNZ / Lydia Anderson

Jan Falke, 21, appeared in the High Court in Dunedin today after pleading guilty last month to five charges, including male assaults female, being an unlicensed driver and threatening to kill.

Justice Rachel Dunningham sentenced Falke to nine months in jail and he will be deported on his release.

The judge accepted he did not have sufficient funds to pay reparations.

His victim spoke through tears as she gave a victim impact statement in court, saying she had nightmares every night for three months.

"I don't know why he did this to me and it seems to me he thinks this is all a game," she said.

She had "moments where I feel lost", she said.

She was exhausted and tried to keep busy by working, but became upset at night when home alone.

"The person I loved and was in a relationship with caused me this incident and I'm confused about that... Did he really love me?

"It's going to take a long time to accept that a person I loved did this to me," she said.

As the sentencing concluded, Falke asked the judge if he could briefly address the victim, which she allowed.

"I can't really feel it on my own skin but I can imagine what I've done to you. I know this is just another burden I put on your shoulders and I can imagine how heavy it will be," he told her as she cried in the back of the court room.

"Yes, I loved you but I was too hurt and I guess I didn't know how to work out a relationship properly," he said, telling her he would work on his anger issues.

"I really, really hope you find happiness and luck in your life," he said.

According the summary of facts, Falke was on a working holiday when he met the woman in Kaitaia in June 2016, and the two became a couple.

They broke up when the woman had a brief relationship with another man, but rekindled the romance after meeting up in Queenstown last November.

In January, she and Falke were camping at Champagne Gully near Cromwell when he became jealous of her talking to other campers and upset remembering what had happened in Kaitaia.

Falke, who was unlicensed and had been forbidden to drive by police, got drunk and later left the campground in his van, texting his girlfriend that he was going to kill himself.

He sent her pictures of his arm, cut and bleeding.

She replied, pleading with him and telling him she loved him.

Falke returned to the campsite saying he wanted to talk to her, but when she got into his van he sped off towards Cromwell on the narrow road above Lake Dunstan.

He yelled at her, "I'm going to kill us. This is what you want".

Using the palm of his hand, he pushed her head forcefully into the passenger window about three times.

As Falke rounded a bend, he failed to take a corner and his van drove up on top of the wire safety barrier overhanging the lake.

He continued to accelerate, knocking down about 42 steel posts over 145m before coming to an abrupt stop.

His girlfriend fled the car and was comforted by passers-by, while Falke tried to tell people she had been driving and had threatened to kill him.

He said he had taken the wheel to steer the van back onto the road.

When found by police he denied hitting his girlfriend, and "his speech was slurred, his eyes were glazed, he smelt of liquor and he was emotional", the summary said.

Falke had asked to meet with the victim in a restorative justice conference but she declined.