Colin Craig wrote a personal letter to his press secretary, saying that he physically desired her but had resisted kissing her. 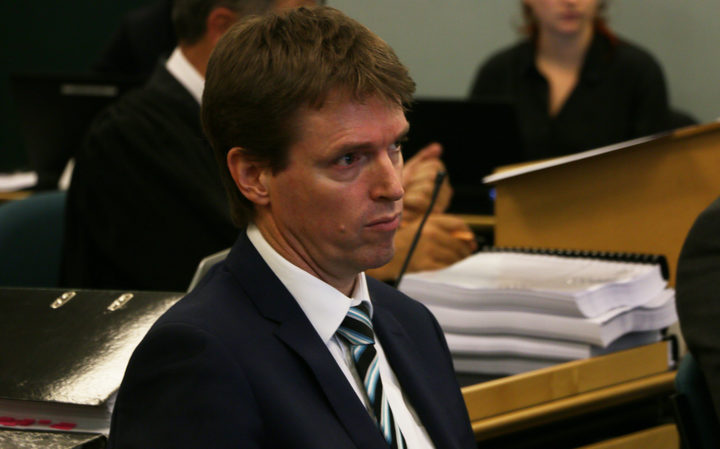 The letter was one of several read out in the High Court in Auckland today, where he is suing blogger Cameron Slater for 18 statements which he says are defamatory.

Many of the statements relate to Mr Craig's relationship with his former press secretary Rachel MacGregor.

Mr Slater has a counter claim and is seeking over $16 million in damages.

Mr Craig wrote to Ms MacGregor just six weeks after she started in the job.

Headed up "private and confidential", Mr Craig, aged 43 at the time, starts the letter to his 27-year-old employee "Dear Rach" and goes on to say he is writing the letter after going to bed early.

He told Ms MacGregor he wanted to give her a letter to read on her day off - during the busy lead-up to the 2011 election.

The letter included spiritual beliefs, quotes from the Bible and a poem.

Mr Slater's lawyer, Brian Henry, read part of it that included Mr Craig recalling a conversation with a friend.

"The other day I got asked some questions. I have great people that keep tabs on me. Questions were - The first one is: 'Colin, are you having an affair?' ... The second is: 'Do you think your relationship with your PA (ie you) is special?' The third one is: 'Have you kissed her?'"

Mr Craig then picked up the reading duties.

The letter continued: "Well, obviously the answer to the first is: 'no', unless I missed something [smiley face]."

He was asked by Mr Henry what he meant by that.

Mr Craig answered: "Well, one of the things Rachel and I did often, and I think it will be very apparent from the communications, is we often bantered about something or joked around - I mean that's just the joking, make you smile, kind of comment."

"The second question was interesting, I said: 'yes'. I am interested in your thoughts on this. I do think we work together amazingly well. Not only are we effective but I think we are in tune with each other."

Mr Craig then addressed the third question of whether the pair had kissed.

"And again, obviously the answer to the last [question] was no - not that I wouldn't want to a lot but that is a boundary."

Mr Henry asked him what he meant by that.

Mr Craig responded: "Rachel and I were very close but we were also aware, I think quite early on, that there were dangers being as close as we were."

Just weeks later on election night, the pair found themselves together alone in Mr Craig's office, where they kissed. Mr Craig said he set about establishing boundaries in their relationship.

Mr Henry asked Mr Craig about a second letter he had written to Ms MacGregor in February 2012 where he gives relationship advice and expresses his spiritual beliefs.

"Physically, I do desire you. There are some times I just want to kiss you and ... Well ... go further. I am just being honest about this is how it is. I've resisted going down the kissing track and shall continue to do so. I've left the door open for you, if you say you need that and I want you to be brave and honest enough to ask if necessary but I expect that would be infrequent and of course there are still boundaries."

Mr Henry then asked: "You wanted her to be your mistress?"

Mr Craig responded: "No, that's not right. If you're asking me: Did I desire her and did, you know, was there a part of me that wanted that? Yes. But ... And it never happened because, I didn't want to go there because I thought there were boundaries. This is an internal struggle that I'm explaining here. It's the struggle between what you might want and what is right."

Mr Craig said this was his way of working through the issues.

The trial before Justice Toogood is set down for three weeks.