A disease that damages trees including pohutukawa, manuka and feijoa has been found on mainland New Zealand for the first time. 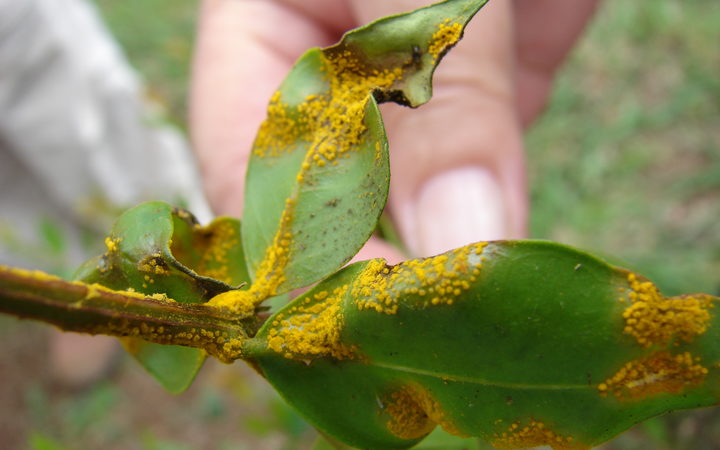 Myrtle rust is prevalent in eastern Australia and Tasmania, and was discovered on Raoul Island in the Kermadecs in late March this year.

A nursery in Kerikeri notified the Ministry for Primary Industries on Tuesday that five of its pohutukawa seedlings had the fungal disease.

It was thought the myrtle rust spores were brought to New Zealand by wind.

Minister for Primary Industries Nathan Guy said the disease was very hard to eradicate and control, and the Kerikeri nursery was now in lockdown.

"We don't know how widely spread it is in Kerikeri. Are we just focussing in on one particularly small area in the nursery, or could it be further afield in Northland?"

Nurseries across the region were being inspected, Mr Guy said.

Since the Australian outbreak in 2010, Mr Guy said the disease has been expected to arrive in this country.

"Our advice to anyone that's growing feijoas or has purchased any trees, particularly from the myrtle family, from nurseries in the Kerikeri region, to please go out and check their trees."

The manuka honey industry might also be at risk, Mr Guy said.

"In Australia it's taken three or five years on average for [the disease] to show signs on the manuka trees over there, so it's a little bit early to understand the impact it could have on the manuka industry."

The disease was easily spread, she said.

"That's why people shouldn't touch it ... The Australians admit that their biggest mistake in the early days was allowing too many people through [infected areas], because it brushes against people's clothings and at a certain stage of the sporing cycle, it can be distributed by people [and] animals, inadvertently."

Ministry for Primary Industries (MPI) spokesperson Geoff Gryn said a team of 20 was in Kerikeri to try to stop the disease's spread, though the odds were not good.

"That said, I have looked at the case studies of Australia, and they believe they had an early opportunity in a nursery which they didn't actually take, and that is one of their regrets. We don't intend to have the same regrets."

Mr Gryn said the ministry needed anyone had bought a pohutukawa or another myrtle species from a Kerikeri nursery in the past month to call its hotline.