UK Prime Minister Theresa May has accused European politicians of making "threats" against Britain to try to influence the general election. 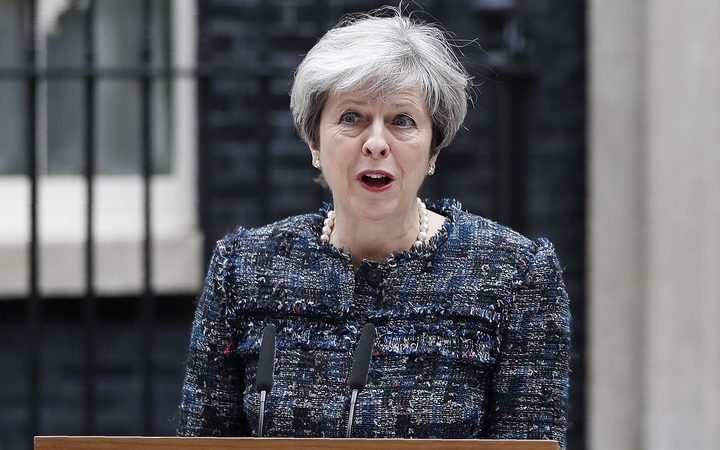 Mrs May launched a stinging attack on the "bureaucrats of Brussels" in a speech outside 10 Downing Street after meeting the Queen.

She said some in Brussels wanted Brexit talks to fail.

Labour leader Jeremy Corbyn said she was "playing party games with Brexit" to try to win the general election.

Scottish First Minister Nicola Sturgeon said it was "irresponsible" of her to "poison" the atmosphere with the EU.

And a senior EU source told the BBC the PM's suggestion that officials were trying to affect the election result was "pure fantasy".

Parliament was dissolved at midnight and the election is now formally underway.

Mrs May said events of the past few days had shown "just how tough" Brexit talks were likely to be.

"Britain's negotiating position in Europe has been misrepresented in the continental press," she said, in a reference to a German newspaper's account of her dinner with the European Commission President Jean-Claude Juncker who is reported to have told her that Brexit could not be a success.

"The European Commission's negotiating stance has hardened. Threats against Britain have been issued by European politicians and officials.

"All of these acts have been deliberately timed to affect the result of the general election that will take place on 8 June."

Mrs May said she wanted to reach a Brexit deal, and for the EU to succeed: "But the events of the last few days have shown that - whatever our wishes, and however reasonable the positions of Europe's other leaders - there are some in Brussels who do not want these talks to succeed."

She also warned of "serious" consequences if the Brexit talks failed, which would be felt by "ordinary, working people across the country".

"If we don't get the negotiation right, your economic security and prosperity will be put at risk and the opportunities you seek for your families will simply not happen.

"If we do not stand up and get this negotiation right we risk the secure and well-paid jobs we want for our children and our children's children too.

"If we don't get the negotiation right, if we let the bureaucrats of Brussels run over us, we will lose the chance to build a fairer society with real opportunity for all."

She was criticised by Ms Sturgeon, who tweeted: "UK needs best possible Brexit deal and has limited leverage, so for PM to poison atmosphere for partisan reasons is deeply irresponsible ... Having called election for reasons of party not national interest, PM now seems intent on fighting campaign in same way."

Mr Corbyn said: "By winding up the public confrontation with Brussels, the prime minister wants to wrap the Conservative party in the union jack and distract attention from her government's economic failure and rundown of our public services.

"But Brexit is too important to be used as a political game in this election."

On Tuesday, Mrs May told the BBC she would be a "bloody difficult woman" towards Mr Juncker during Brexit talks.

Asked about her comment, Mr Juncker's chief of staff Martin Selmayr said: "President Juncker said today that she is an impressive woman and that she is a very impressive negotiator."

He added: "Brexit will never become a success, of course, because it is a sad and sorry event. But as I have set out, it can be managed in a professional and pragmatic way."