The humble feijoa tree in your garden or neighbourhood could be under threat from a tiny, insidious little pest. 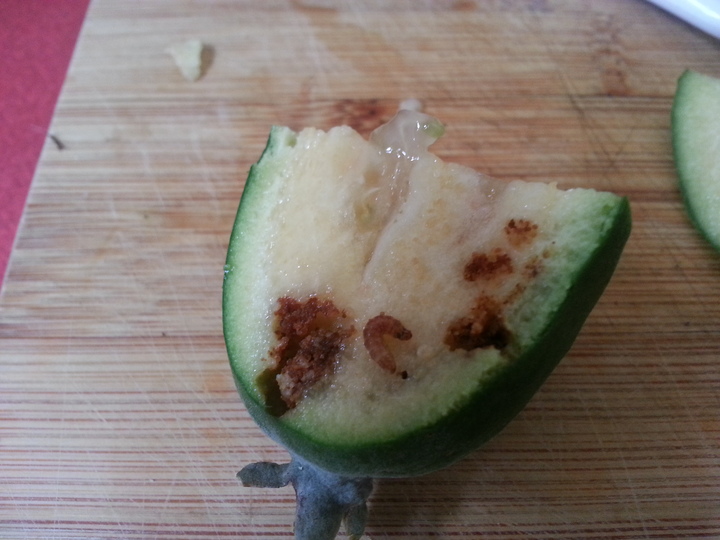 A feijoa grown in Devonport in Auckland which has been affected by guava moth larva. Photo: RNZ / Joanna MacKenzie

In the Auckland region this year, there has been an explosion in the population of the guava moth, Auckland Council's biosecurity team said.

The moth's larva burrows into the feijoa and other soft fruit and ruins it.

Alice Rennie is a keen gardener in the Auckland suburb of Half Moon Bay and knows all about the difficulties that the guava moth can cause.

Her small garden is a treasure trove of fruit trees and vegetables and should be providing her with ample produce throughout the year.

"Most of my food and fruit and veggies comes from the garden. And I noticed about four years ago that the plums had tiny weeny holes in them and when I cut them open I found bugs," she said.

Her plum tree used to produce about 80 kilograms of fruit; this year there were only four plums unaffected by the guava moth larvae.

That bug soon spread to Ms Rennie's two feijoa trees and this year has been the worst yet.

"There's hardly any fruit left, less than half a dozen fruit still on the tree and it's not May.

"They've all fallen off, bar these few that are left."

A sure sign that a tree was infested was if the fruit fell before it was ripe and if there was a tiny hole on its skin, she said.

Sahe said her neighbours were affected, as were friends' gardens on Waiheke, the North Shore, West Auckland, Mangere, Waiuku and around Orakei.

The guava moth is not a new pest - it was first found in Northland in 1997 and over the past few years has become a problem in pockets around Auckland and further south.

Auckland Council principal of biosecurity Nick Waipara said they were fielding calls about the moth from all over the region.

"There's been a deluge of reports and complaints. Gardening clubs across Auckland are reporting it. It's in the urban suburbs, it's in the more rural parts of the Auckland region as well.

"Obviously, it's not 100 percent but there's some clear indications that the damage is very heavy this year and some people are losing 100 percent of their fruit," he said.

The feijoa had always been a reliable fruit and little or no skills were needed for trees to thrive.

That was about to change, said Dr Waipara.

"Apricots peaches, nectarines, and plums - if you want those growing in your garden you have to protect against brown rot and you have to do a whole lot of preventative measures.

"Well, unfortunately for feijoa growers, you'll probably have to do the same with this moth now and quite intensively because you need to protect each fruit from the larva," he said.

Commercial growers in Northland had a very tough season last year because of the guava moth.

But Kerikeri grower Peter Jack said this year had been different possibly because of a chemical he sprayed on his trees.

"I can't be 100 percent sure, but possibly the chemical and the very, very dry summer up until that big rain we had."

Mr Jack said the chemical was too expensive for home gardeners so the best hope was research being done by Plant and Food.

It has set traps in the last few weeks in Auckland, Waikato, Bay of Plenty, Gisborne, Hawke's Bay and Nelson to track the moth's population distribution.

The Ministry for Primary Industries has also given nearly $300,000 for research to the Feijoa Association.

Dr Waipara said until a fix could be found gardeners should try neem oil or pheromone traps and clear fruit as soon as it fell to stop the moth spreading.