A visit by two government ministers to Kaikōura has been called off, because the Air Force's NH90 helicopters have been banned from flying over water, mountains and towns. 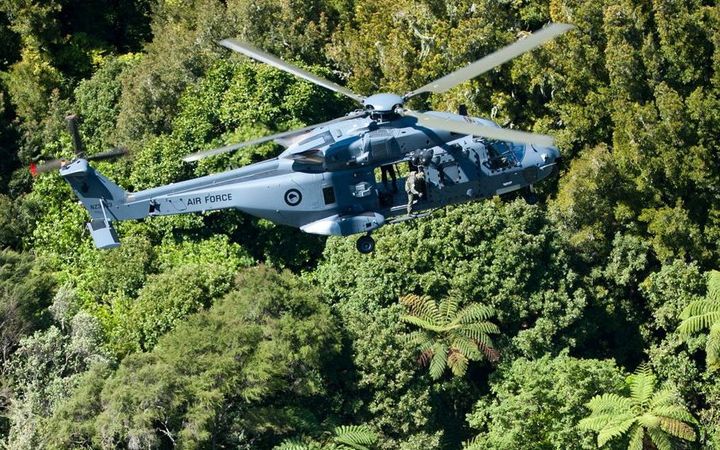 An Air Force NH90 helicopter in action: The Defence Force said it was unclear what had caused Sunday's problems. Photo: Supplied / NZDF

The flying restrictions were put in place following an emergency landing by one of the helicopters near Blenheim on Sunday.

The Air Force was still investigating what caused problems to the engine, but said it would limit use of the helicopters in the interest of safety.

Air Force Chief Tony Davies said it could be anywhere from a week to three or four weeks before the problem was fixed.

Flights would no longer traverse areas where emergency landings were not possible, such as cities, mountains or water.

A visit to Kaikōura, which was badly hit by last November's 7.8 magnitude earthquake, by Cabinet ministers Gerry Brownlee and Jonathan Coleman has been cancelled because of the change

Air Vice-Marshal Davies said the engine had been pulled out of the helicopter which was forced to land on Sunday, and it would be sent to Sydney for examination and almost certainly parts would need to be sent to a laboratory in France to find out exactly what failed.

"It was just in the vicinity of the coast about to head out over the water and the crew felt a bang and the interruption to that particular engine's instruments followed by a loss of power."

He said half of the crew had just completed their emergency training refresher course and the others had done so a year before, and was by all accounts a textbook recovery.

The NH90 helicopter model has two engines, he said, allowing it to be landed with a reasonable amount of control even if one engine fails.

"The NH90 is a remarkable aircraft, it offers hugely improved capability over the Iroquois," he said.

The Defence Force said it would resume normal flights as soon as possible.

The helicopter that made the emergency landing had nine people on board at the time, and was experiencing problems with one of its two engines.