Silver Fern Farms has been found to have acted unlawfully during a staff restructure at its Fairton Meatworks plant near Ashburton. 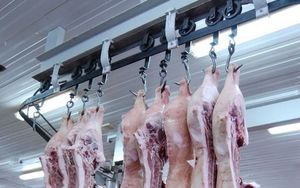 A file photo of a meatworks plant Photo: 123rf

The Meatworkers Union complained to the Employment Relations Authority (ERA) following concerns that the restructure in 2015 was not genuine, and that Silver Fern Farms was using it as a reason to reduce wages.

In its ruling the ERA said there were 14 staff working in the animal assembly department at the plant, prior to the restructure, who would rotate through roles.

The assembly department unloaded and counted stock and herded them into pens at the plant.

It said Silver Fern Farms was concerned about the cost of the department and proposed a restructure.

This would change the department's processes so that lower-paid labourers were rostered on more than shepherds who were paid more.

Peter Van Keulen from the ERA said as a result of the change, staff's hours and hourly wages were reduced even though the actual job and the skills required remained the same.

The union said five employees took voluntary redundancies as they were unhappy with the changes.

Mr Van Keulen said he accepted the union's submission and concluding that the restructure was "flawed" and the Silver Fern Farms had acted unlawfully.

He said that the company failed to meet its obligations to adequately consult with the union.

"I am satisfied that Silver Fern Farms' actions do amount to a breach of the duty of good faith," Mr Van Keulen said.

But he said he was satisfied that the company was genuine in its desire to reduce costs and its belief that the proposed restructure was the correct way to do it.

However, the breach of good faith did not warrant a penalty, he said.

Meatworkers Union Canterbury spokesperson Bill Watt said he was satisfied with the ruling, but was unhappy it did not go further.

"It gives the people who work at Silver Fern Farms some kind of security their employment status, their agreements, will be adhered to.

"We had sought a penalty because of their behaviour but we were disappointed there was no further consequence to them," Mr Watt said.

He said employees were getting their wages "made up" over a period of time so most of the staff were not out of pocket.

Silver Fern Farms said it was assessing the decision, with a view as to whether it would appeal it in the Employment Court.