An exhibition of earthquake-inspired artwork by four Kaikōura artists has opened at Parliament's Bowen House.

Among Susie Baker's photographs of the post-quake Kaikōura coastline, one shot particularly stands out: a jagged seabed jutting out from the peninsula like the edge of a broken plate.

To create a sense of chaos, Ms Baker stains her photos with chemicals, but, while working on this photo, things were not turning out as she wanted.

"I was a bit concerned I wasn't quite getting it - and then there was a 5.2 aftershock," she said.

"I had the brush in hand ... and, as I was trying to put the chemical on, the whole darkroom started to shake."

"I dropped everything and went and checked on my young children, and then came back 10 minutes later."

"[He] came to my studio in Kaikōura. He saw my body of work.

"I'd just got back from Wellington, from the New Zealand art show, and I had a couple of these New Zealand pieces in amongst my work. He said, 'Oh, I really like those - did you know you can have shows at Parliament?'" 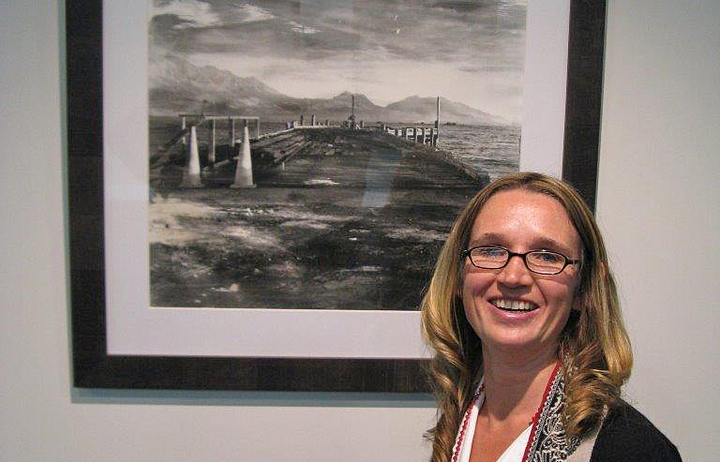 Susie Baker with one of her art works. Photo: Supplied

Ms James painted her six pieces for the exhibition in six weeks.

Many featured the town's devastated countryside, which was at times disturbing to portray, Ms James said.

"I wanted to show the changes in the landscape. "The mountains so scarred and to have the road closed ... it has a very surreal feel."

Ms Smith said the scarred landscape was evolution in a changing world.

"The sun shines, the clouds are there. It's ever changing."

One of Ms Riley's paintings depicts a supermoon lighting up the sky as six warships sail towards the town.

It was a sight she said she would never forget, but did not want to see again anytime soon.

"When you produce it, it brings up all those emotions.

"You go into your painting when you're making it. I had to be in that space, in that fear. I had to be there."

The free exhibition is at Parliament's Bowen House. It is open from 10am to 3pm, Wednesday to Friday, until 13 April.