A rambunctious wild ram is now "behind baaaars" after alarming motorists on Dunedin's northern motorway by jumping out at cars. 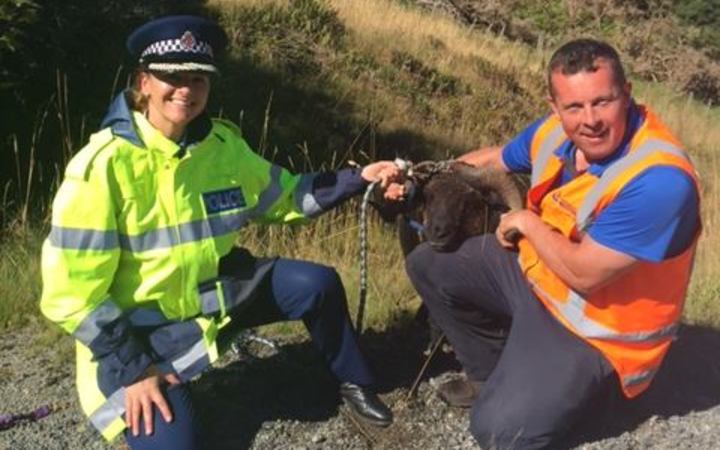 The ram had been on the run for several weeks. Photo: Facebook / NZ Police

After several weeks on the lam, the ram was caught near Butler's Bridge yesterday in a combined effort by animal control officers and police - but not before he made a final getaway attempt.

Southern road policing manager Tania Baron said she got a call about the ram "causing havoc" on the motorway and volunteered to "have a wee look".

Animal control officer Alistair Wilden had already been trying to catch the animal for weeks, she said.

"Last time he tried to catch it, it charged at him and jumped at about chest height, so he had his farmer's crook this time."

As the pair narrowed in on the fugitive, officers thought they had it surrounded behind some barriers, she said.

But when they approached it, the "wily old ram" jumped the barrier and took off down the road and up a bank.

"I got in my patrol car and managed to muster it down into a scrub area off the side of the motorway ... with red and blue lights flashing."

It was unclear where the ram had come from, but it did not look like he had been in the wilderness for more than a few months, Ms Baron said.

"He was pretty feral and he had really sharp curly horns, which I wasn't really too keen on getting too close to."

She was not worried about her own safety, though.

"I'm a farmer's daughter, I've been charged by many a sheep. He was just trying to get away."

However, she said she would rather deal with a "charging human, because at least you can negotiate with them".

Both Ms Baron and Mr Wilden had attended police college together 20 years ago and were now joking about how they set out to save the world and ended up mustering sheep, she said.

Police had been concerned about the ram roaming beside the motorway in a 100km area, after a few calls from concerned motorists.

"He's been having a grand old time but he's now behind baaaars."

Mr Wilden said the healthy ram was now at the Dunedin City Council's stock pound and its owner had seven days to come forward, or it would be auctioned off.

Public comments on the Southern District Police Facebook page suggested the ram had been venturing onto properties around Pine Hill, with one person saying it looked like "the same scary frothing-at-the-mouth creature I saw a couple of weeks back".