Auckland kindergartens will open for longer hours and over school holidays to make childcare available to more people. 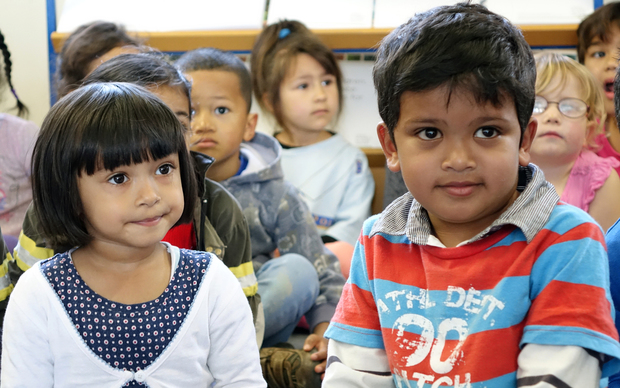 The changes will be made at all 107 kindergartens in Auckland by the end of 2018. Photo: RNZ / Kim Baker Wilson

The Auckland Kindergarten Association, which runs 107 centres across the city, said some centres were struggling to fill spaces because opening hours were too short and they did not open during school holidays.

The association is proposing to open all centres from 8.30am to 3.30pm - adding an hour a day - and opening all year except for the annual Christmas and New Year close-down period.

The changes have already been made in five kindergartens and will be implemented in all others by the end of next year.

"What we are doing is just extending the time - families are struggling with traffic and drop-off and pick-up times, which is impacting on our government funding."

Ms Harvey said the changes also came down to money, stressing that kindergarten would remain not-for-profit.

"If we want to survive and thrive then we need to accept the fact that we need to change to meet the needs of families and retain or even grow our funding.

Government funding to kindergarten had been cut repeatedly since 2010, she said.

The Auckland Kindergarten Association signed a High Trust Agreement with the Ministry of Education in 2014.

Under the agreement, the ministry said partnering with the Kindergarten Association would ensure action could be taken by both parties to increase early childhood participation.

Its target was 98 percent of children attending early childhood education by 2016, but yesterday the government announced it had fallen just short of that, with 96.7 percent attending.

Paul Goulter is the national secretary of the Educational Institute, the union that represents kindergarten teachers, and said the changes were a result of the government's failure to fund early childhood education, he said.

"The government says it is spending more in the sector but that is to increase participation, which is coming at the expense of quality.

"Services, including kindergartens, are cutting corners and trying to find ways to make up for the funding shortfalls," Mr Goulter said.

Teachers understood the pressures kindergartens were under, but were aware their working conditions were going to change drastically.

"The other option for kindergarten at the moment is to join other agencies in asking the government for more funding in the next budget."

Stuart King, whose four-year-old goes to kindergarten, said the changes had become a huge discussion point in his community.

Parents were worried kindergarten would just become another daycare and lose its distinct identity, he said.

"I think it's a more caring and participative environment in kindergarten - they are a not-for-profit organisation as opposed to daycares where they are solely focused on money.

"There are plenty of options for parents out there if they work and can't make kindy times - that's what daycares are for."