A new Auckland University club claims it wants to celebrate European culture, but critics fear it is being given a platform to promote white supremacist values. 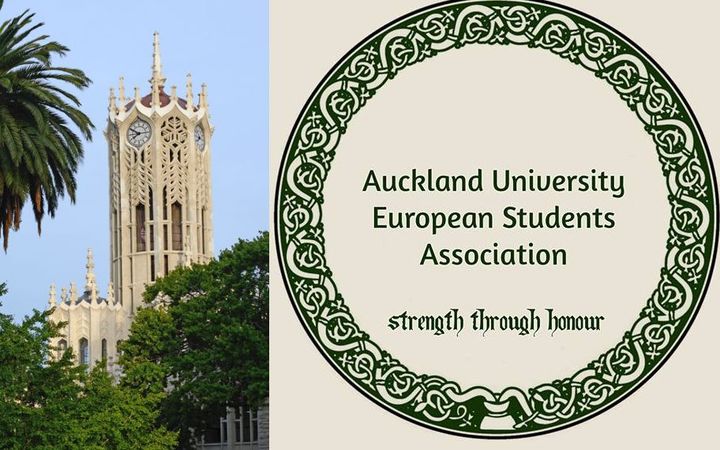 The Auckland University European Students Association plans to hold a stall at the university, left, next week. Photo: RNZ / Facebook

The newly-formed Auckland University European Students Association plans to hold a stall at the Clubs Expo during orientation week next week.

Students and staff have expressed alarm, saying the group's publicity material is typical of nationalist so-called 'white pride' and fascist organisations, and have questioned whether it is appropriate for the club to have a presence at the expo.

But the new club said it was inclusive and just wanted to promote European-themed events.

The president of the association, who did not wish to be named, said it aimed to promote European culture on campus, through activities such as medieval re-enactions and themed events.

He said there were clubs for other nationalities, but there was no European club, despite Europeans accounting for more than 40 percent of the university's students.

"There are many groups on campus that promote Pacific Island culture and Māori culture, there is an Indian society. And they all use their iconography, so why can't we use European iconography?"

He said the group might reconsider its slogan "strength through honour", which critics said closely resembled a Nazi motto.

"Quite frankly, I don't even call myself a white person - I would say I'm just a New Zealander of European heritage.

"We have Asians involved, our treasurer is from Vietnam, so it's completely nonsense to call us racist - we're not for white people or anything like that. I reject all those claims."

In a statement on its Facebook page, the group said its members were not fascists, racists or Nazis.

The university said it was normal practice to allow new clubs to attend the Clubs Expo, despite not yet being formally affiliated.

Auckland University Student Association president Will Matthews said the university was allowing the European Students Association to be involved in the expo because it had not yet committed any directly offensive acts.

But the group had posted slogans and material on its Facebook page that were considered typical of nationalist 'white pride' and fascist organisations, Mr Matthews said.

"Their use of paintings that show colonial figures and highly nationalistic work about German unification - that group's slogan, which is a similar English translation of the motto used by the Nazi SS."

Mr Matthews said the need for free speech must be balanced with the importance of having a safe and tolerant campus.

He said the current political climate was emboldening people with nationalistic and oppressive views.

But the president of the new club said if anyone promoting those views joined, they would be expelled.

"If they're interested in our group, we can't stop them liking our page, but they'll have no affiliation with us. They'll actually be expelled from the group or just won't be allowed to even join in the first place.

"It will mainly be 18 to 22-year-old people who have an interest in European culture," he said.

Shaun Hendy, the director of Te Pūnaha Matatini and a professor at the university, said the association's statement looked like back-tracking.

"Far-right groups generally aren't seen as socially acceptable, so they do use these symbols and words to signal to other people that they associate with the far-right.

"Although they've put these statements out, I think the obvious intent of the group was not open and inclusive."

A university spokesperson said while the university believed in free speech, hateful or discriminatory behaviour was not condoned.

Race Relations Commissioner Dame Susan Devoy has also said she would be keeping an eye on the club.

The club expo runs throughout next week.