A woman who was "soaked" in petrol because of a broken pump at a station near Wellington says Z Energy has lost her trust and she is not likely to fill her car up there again.

The company is investigating why its staff did not immediately call the Fire Service and how the pump broke.

Ingrid Carson was covered in petrol when she went to fill up a small can for her lawn mower at the Z Energy on Kapiti Road in Paraparaumu yesterday, because of a split in the pump.

"As soon as I pulled the trigger, petrol just showered me," she said.

"All over my hair, all down my back, I was soaked. I just dropped the bowser handle and ran."

When she looked back, she saw that the point where the hose connected to the pump had split open and petrol was spraying out in all directions.

After she rushed inside to get some help, staff got her car moved out of the way and shut off the faulty pump.

She was offered a coffee and a muffin for her trouble, she said.

"It was all through my hair, all over me. He got some serviettes out of the muffin thing and wiped my back."

She pointed out the split petrol hose.

"One of them just said 'oh, the customer before you did something with the hose and I was going to go over and look and see what happened but I got busy with a queue of customers'."

Mrs Carson managed to get a piece of plastic to cover her car seat and was charged $10 to have her can filled. 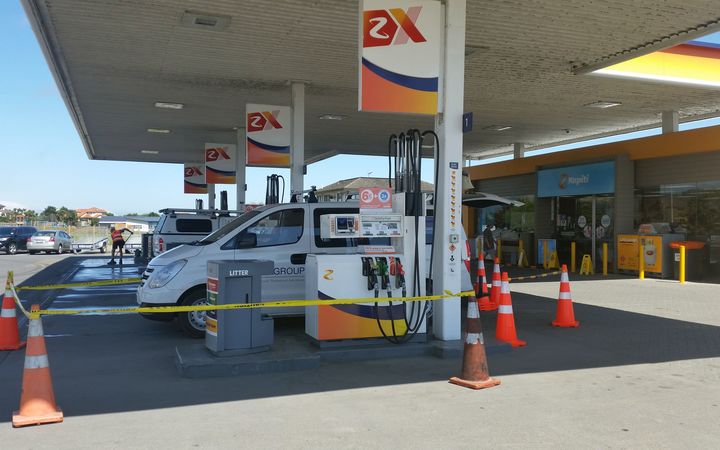 Back at home her neighbour, a volunteer fireman, told her to get straight into the shower, while the Fire Service was called to come and decontaminate her.

She said she was in shock and Z Energy should have done more to ensure her safety.

"Shock had definitely set in, and I wasn't thinking right, and I was definitely a bit shaky, and my blood pressure was up. And it was like reality set in and I was like 'this could have been very bad'.

"I don't think I realised quite the implications until I'd come home and had the ambos and the fire guys with me.

"Yet those guys ... had given me the muffin, the coffee, they'd filled my jerry can, I'd paid for it ... three of them said 'have a nice day'. It was like 'you've been processed'."

Her clothes were ruined, including a skirt that was a Christmas present from her husband and some expensive footwear.

Mrs Carson said she would now feel uncomfortable buying petrol from Z Energy, because of the risk the company had put her in.

She said she had since received flowers, a fuel voucher and compensation from the company for the stress and loss of clothing.

'She could have been a fireball'

Jon Carson, Ingrid's son, was furious at the risk his mum's life was put in.

"How the hell does this even happen? She could have been a fireball.

"Petrol's combustible, it has a very low flashpoint. It's a chemical, it shouldn't be on you."

They called Z Energy but after a couple of hours waiting to get a call back, he did not think the company was moving quick enough and posted what happened on Facebook.

"It's an accident that should never have happened, we are very, very sorry that this has happened and have apologised to the customer for it.

"As soon as we know the outcome of what exactly went wrong, we will make sure we will learn from it and that it doesn't happen again. It is a very, very rare incident."

Mr Hill said he hoped the investigation would be completed by the end of the week.