Northland dairy owner Hemant Lal, held up nine times in 13 years, is in despair over what he calls the "joke" sentence handed down for a robbery that could have killed him. 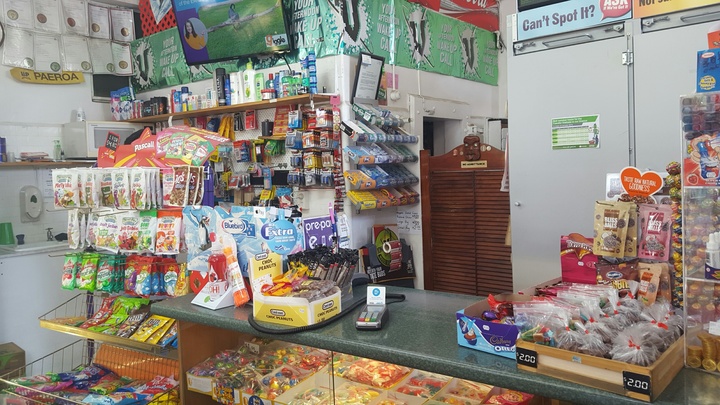 Hemant Lal said he sometimes thought of selling up, but he couldn't and wouldn't give up the business his family had worked to build. Photo: RNZ / Lois Williams

Two 18-year-olds have been sentenced to home detention after one of them bashed Mr Lal in the head with an iron bar.

The shop is immaculate, with sparkling windows, grocery shelves stacked with military precision and an old-style display of sweets behind glass on the counter.

It was here that Eruera Wharerau, 18, whacked him on the head with a tyre iron and demanded cash last July.

Mr Lal ran from the shop and smashed the windscreen of the robbers' car in a bid to foil their escape.

It did not work. He spent three days in hospital and suffered crippling headaches for months.

"In the head I was really badly hurt, at the back of my head it was all swollen.

"At one stage I wanted to close the shop, I really wanted to close it, but now I'm coming right. I got the right medicine and thank God that Whangārei Hospital saved me."

In 13 years, Mr Lal, who has two children, has been held up nine times.

Once was at gunpoint. In another, a robber slashed his elderly father's hands with a knife as he cowered behind the counter.

Mr Lal fought back that time too, to defend his dad.

For his pains he was charged with assault - a charge that was later dropped.

The Hikurangi shopkeeper said the sentences handed down to those who robbed him over the years were clearly no deterrent to others.

It galled him to think the latest youths to have a crack at his life and livelihood would sit at home, on a benefit, while he continued to work.

"It's a joke, it's not enough, because they know they're going to get away with it, that's why they have done it. I want to know the public view, what does the public say? ... But is it enough, doing something like that, hurting people who are working?"

One of the youths, described as the getaway driver, was sentenced in Kaikohe's Matariki Court last week to five months of home detention.

The court is a pilot scheme for young Māori offenders who are willing to plead guilty and take part in a restorative justice process - including a personal apology to the victim.

Moerewa elder Ngahau Davis, who helps run the scheme, said the boy in question was given a ride home from polytech by mates who decided on the way to rob the dairy.

He protested and never entered the store - but he drove them away when told to.

'He's never been in trouble before'

Mr Davis said the boy had no previous offences. He came from a family of teachers and police officers prepared to keep a close eye on him.

"He's never been in trouble before, if we can get to this boy and do the work, this will never happen again, that's the other side of the coin."

The lead offender, who Mr Lal said ruined his life for months, was sentenced in the Whangārei District Court to nine months' home detention.

"Him and his wife and children are the nicest people, just wonderful, and ... this is just disgusting these young kids just think they can do anything, they don't care."

Mr Lal said he sometimes thought of selling up and leaving Hikurangi, but he could not give up the business his family worked to build, despite the daily risk.

Northland MP Winston Peters said the robber who bashed Mr Lal should be sentenced to hard labour, not home detention.

Mr Peters, who knows Mr Lal, described the sentence as a "rap over the wrist with a wet bus ticket".

"We need to change our sentencing options here. These two guys should be put to work, six days a week, to make up and atone for the kind of crime that they have committed."