Two kayakers have endured a overnight ordeal near Lake Taupo, in which one was revived after he was submerged under a waterfall. 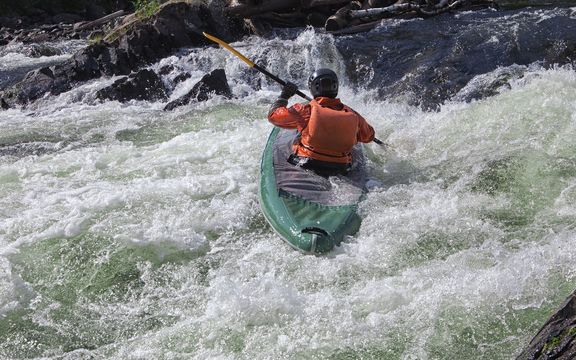 Police said the pair were on the Tauranga-Taupo River yesterday afternoon, when one got into serious trouble after paddling over a waterfall.

Senior Constable Barry Shepherd of Taupo Police Search and Rescue said both men were experienced kayakers who had paddled dozens of waterfalls around the world, but got into trouble on the 25 metre Tauranga-Taupo Falls.

"As the first kayaker paddled over the falls, he landed badly, getting knocked out and submerged in the water. His kayaking partner, who was at the bottom looking out for him, immediately pulled him out and performed CPR on the riverside, successfully reviving him and saving his life."

With no way to call for support, the men continued paddling down stream, but missed an exit point.

With darkness setting in, the pair stopped and lit a fire, with the uninjured man then walking five kilometres down a forestry road to get cellphone reception.

Rescuers found the first man about 2am today. The injured man was rescued an hour later.

"Wet, cold, disorientated, injured and coughing blood, the injured kayaker had to wait on his own with no knowledge of when a rescue might come," Mr Shepard said.

The 25-year-old injured man was recovering in Taupo Hospital. He will be moved to Rotorua Hospital later today.

Mr Shepherd said a personal locator beacon could have saved the men several hours of distress.

"A PLB should be taken with you in any remote areas for use in emergencies like this. Cell phone reception isn't needed if you get in trouble and the two wouldn't have needed to split up.

"Luckily these two were so fortunate on this occasion, and they had the right knowledge and just enough emergency gear on them to make it out alive."

Police said the friend could rightly be called a hero.