Residents of up to 100 Port Hills properties will have to stay away from their homes for at least another night as the fire threat continues. 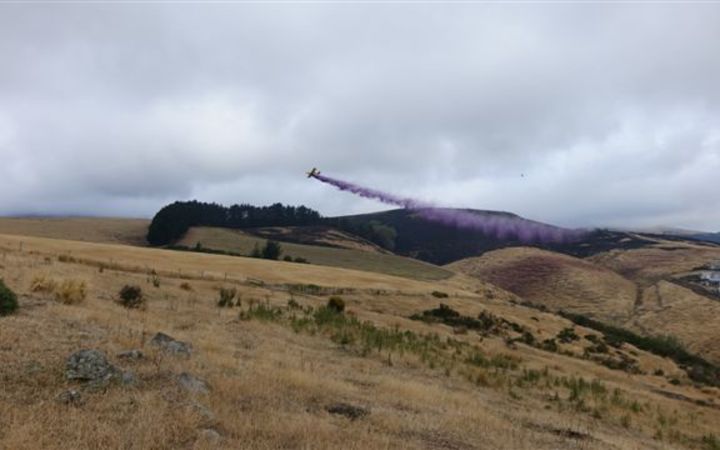 Civil Defence moved back three cordons today, allowing some residents to return to their homes.

But Civil Defence would not give temporary access to residents whose homes were still behind cordons.

It said secure fire containment lines, providing a buffer between the fire zone and residents' houses, have not been completed.

It said it hoped residents would be allowed back to their homes tomorrow and plans to provide an update at 8am.

A new cordon has been created on Victoria Park Road, allowing people to return to their homes further down the hill.

Meanwhile, MetService says it will be slightly warmer tomorrow, with scattered showers and high humidity - conditions that are unlikely to stoke the fire.

Civil Defence said people trying to explore the area around the Port Hills fire were putting themselves in danger. Some people riding bikes or on foot have tried to enter zones that are off-limits - such as areas between the Rapaki Track and Gebbies Pass.

Civil Defence said these people were risking their safety as the fire could quickly spread or flare up if the wind changes.

About 400 people affected by the huge fires in the hills above Christchurch turned up to a meeting in Sydenham this morning with Mayor Lianne Dalziel and emergency service officials.

Civil Defence was attacked for its poor communication and angry residents demanded to know why they hadn't been able to access their properties when it seemed the danger was over.

The chief rural fire officer for Christchurch, Darrin Woods, said cordons were set up according to information provided to Civil Defence, analysing the likelihood of flare-ups.

"We do have fire scientists working on this and they have identified to us late yesterday afternoon that we still have a risk for those areas, and the scientists are working at this very point in time to determine whether it is safe to ease back on those cordons and let you back into your homes, so that is the key priority."

Eric Espiner learned of the fires when he stopped over in Sydney on his way back from London on Thursday morning.

He was looking forward to a home-cooked meal for the first time in days.

"I'm over the moon, because it looked very difficult to get in as per this morning's meeting, so we were out of that meeting facing the unknown, you know several days of even trying to get access.

"Just praising my lucky stars, being grateful for all the tremendous work done by the fire services."

While the evacuees praised firefighters' efforts, the council's communication came under attack. 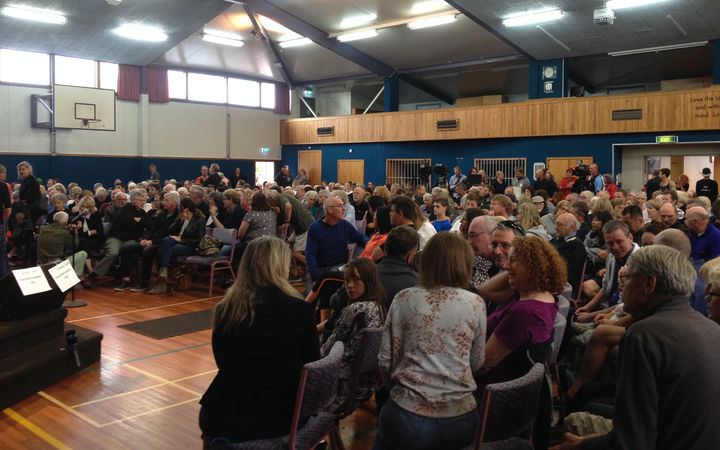 About 400 people turned up to this morning's meeting Photo: RNZ / Emile Donovan

Drizzle is falling today and is expected to turn to light rain with north-easterly winds.

But Mr Woods said the forecast for tomorrow was for rising temperatures.

"There is a great risk that if we rush this process and allow you back into your homes, tomorrow we will be asking you to leave again."

But residents said they wanted specific details about fire hotspots and when they will get back to their properties.

One told the meeting he was prepared to have to leave again, but just wanted to get back home.

Many have criticised Civil Defence for its poor communication.

With the audience segregated according by suburbs, the loudest jeers were heard from the Kennedy's Bush quarter, where dozens of residents are still blocked from accessing their homes by a police cordon.

Graham Townsend, who lives at the top of Kennedy's Bush, said communication from Civil Defence had been appalling, and he couldn't understand why he wasn't being let into his home when others nearby have.

Another, Paul O'Connor, insisted his home was well away from the blaze, and couldn't fathom why it was still cordoned off.

Mrs Dalziel said the council made the same communication mistakes in the earthquakes, but the authorities would lift their game.

"We will keep you informed much better than you have had up until now, you are entitled to receive my direct apology for the quality of the information to date and I apologise, but we are lifting the game."

Mrs Dalziel said residents who had registered would be emailed, texted or called every hour, and information would go out on social media. 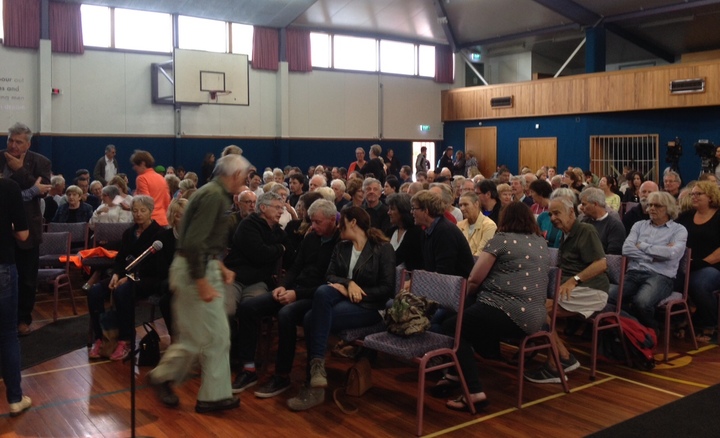 Some who are angry they have not been allowed home. Photo: RNZ / Emile Donovan

While the mood at the meeting was volatile, there was widespread acknowledgement of emergency services' response to the fire.

The rural and urban fire brigades' efforts in particular were lauded by the audience, receiving a standing ovation.

Chief rural fire incident controller Richard McNamara spoke emotionally about his late colleague, Steve Askin, who died while battling the fires when his helicopter crashed near Sugarloaf on Tuesday afternoon.

And even among Kennedy's Bush residents were locals sympathetic to the situation council and emergency services were in.

Gwyn Edwards said the priority for the council and emergency services was to protect people's lives, however inconveniencing that might be for evacuees.

"I was very embarrassed by my community up there from Kennedy's Bush today. There were a lot of people who were very vocal and very self-centred in their behaviour towards the situation."

He said while there were issues with how orders were communicated, the chief concern was for people's safety, and those in the area had to accept they would be inconvenienced for as long as it took.

Mr MacNamara said the efforts of firefighters and homeowners had been courageous and gutwrenching.

Firefighters did everything they possibly could to save houses but they would not put lives at risk for the sake of trying to save bricks and mortar.

Mr MacNamara said the handling of the operation would be formally audited.

The fires in the Port Hills destroyed 11 homes and forced the evacuation of hundreds of others. Two fires which started on Monday merged into one huge blaze, scorching more than 2000 hectares before it was contained within a 29km perimeter yesterday. 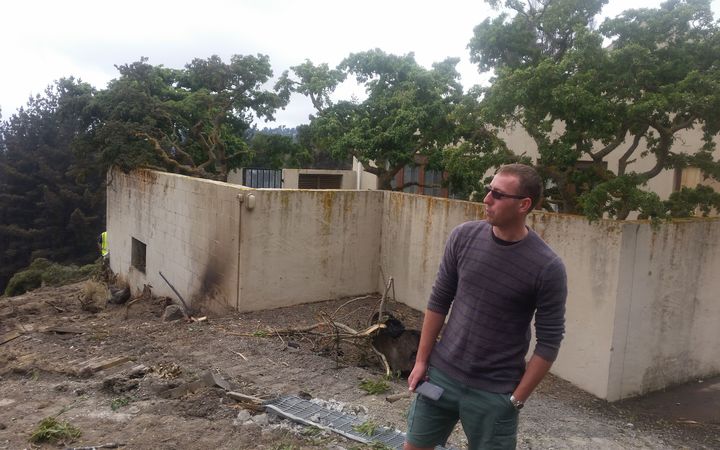 People in most of Westmorland were allowed back yesterday, after four days away.

Wade Ruebe was one of those residents who went to his his home yesterday, as helicopters flew in to scoop up water from his neighbour's pool.

"There's been fire on all sides of it, we've lost the garage but the house is fine," he said.

But all Simon Grace had managed to save from his property were a box of photos and his car, he said.

Mr Grace said he was devastated as he surveyed the ruins of his family home on Worsleys Road. "There's just a couple of bricks left, there's nothing. We've been here 20 years, so there's a lot of stuff here, had a lot of good times here and it's a shame just to see it all turned to dust." 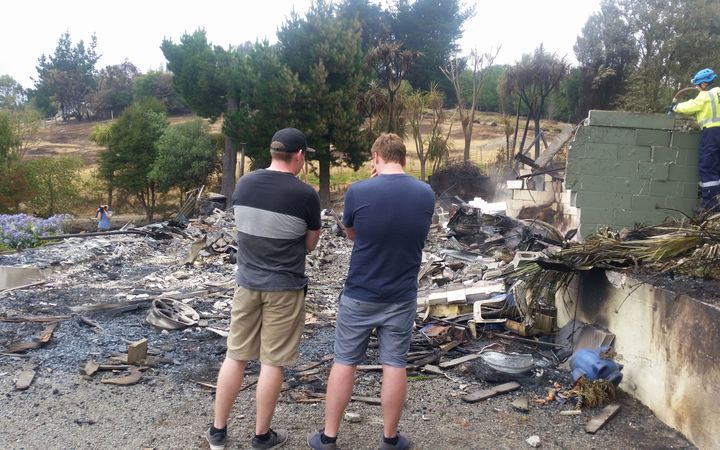 Simon Grace and his brother at the remains of his home. Photo: RNZ / Sharon Brettkelly

People not yet able to go home are being encouraged to register to be let through cordons to collect belongings and check on animals, civil defence said. About 80 people had registered. 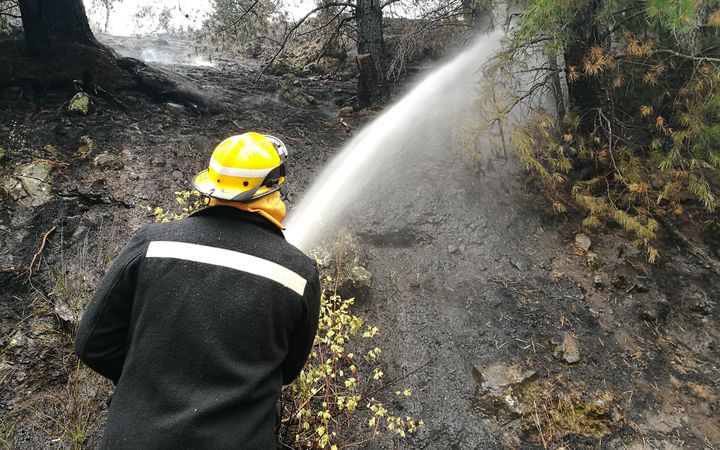 A firefighter dampens down a hot spot in the wake of the fire. Photo: RNZ / Logan Church

Crews have been moving from air-based to ground-based firefighting, civil defence said. Diggers have been working to create fire breaks and in areas they can't get to, fire retardant is being used. 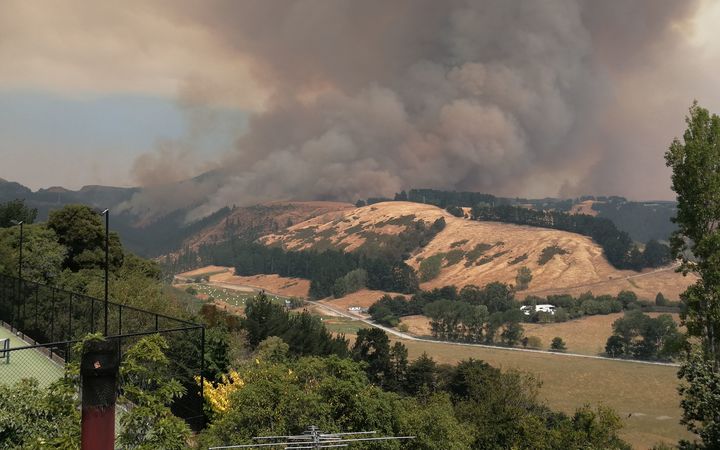 The fire burning near Worsley Valley in the Port Hills on Thursday. Photo: Supplied / Richard Vance