A New Zealand diver who found himself facing off with a killer whale on the weekend says he "felt like a seal".

Hamish Stewart, 35, was diving for scallops off Rangipukea Island near Coromandel on Sunday when three killer whales made a beeline for him.

One of the killer whales, also known as orcas, eyeballed the Hamilton builder from about 1 metre away.

"All I saw was this big black and white face."

The encounter was caught on video by Mr Stewart's sister, Kylie Strongman, who spotted the orcas in the distance and saw them suddenly become aware of her brother and set a direct path for him. 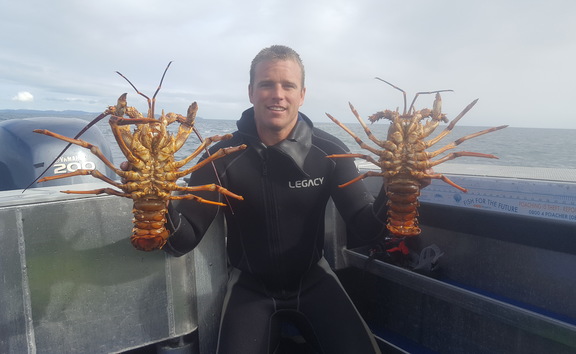 Mrs Strongman and her father were on board the boat Mr Stewart had dived from and quickly revved the engine to signal to Mr Stewart, an experienced diver, to surface.

He came up so quickly that his mask filled with water - a lucky break, he said, as he was unable to see one of the killer whales swim directly beneath him.

Hearing his sister yell, "They're coming right to you", Mr Stewart ducked back under water and found himself face to face with one of the orcas.

"It felt like forever," he said of the face-off that likely lasted only a moment.

It was also a long moment for Mrs Strongman, who said one of the killer whales was as long as their 6.8-metre boat.

"You know deep down that orcas don't kill but they were huge … and you don't know if they were protecting their babies or thought he was a seal," she said.

It was the family's second encounter with the killer whales that day.

They had earlier stopped to visit a beach on Rangipukea Island and were delighted to see both orcas and stingrays swimming nearby.

But by the time they set off to let Mr Stewart dive the killer whales were nowhere to be seen.

"Now that I look back it was a pretty awesome experience," he said.

Although, he didn't get any scallops.