An Auckland community is stepping up its fight against the development of a huge retirement village, which has been likened to a prison.

An artist's impression of part of the planned 600-bed retirement complex in Devonport, Auckland. Photo: Supplied

Ryman Healthcare's plan to build the 600-bed complex in Devonport has already been granted consent by Auckland Council.

But a group of residents has lodged an appeal with the Environment Court to challenge the development.

The 4.2 hectare site lies between Ngataringa Road and a strip of regenerating native bush on the edge of Ngataringa Bay, which looks out towards North Head, Mount Victoria and over the harbour to the city.

Ngāti Whātua own the land, but it has been leased to Ryman's healthcare for 150 years.

Devonport local Trish Deans told RNZ that no one is against a retirement home being built, but the community was not happy about the bulk and scale of the design.

"It's such a beautiful site [that] any proposal should reflect that rather than be an institutional series of blocks. So that's really the residents' main concern," she said.

"Everyone is okay about the fact that there should be a retirement centre here - that's absolutely fine - but it's how it's done."

Ms Deans said the way the complex was designed meant residents of the retirement village would be cut off from their surroundings.

"They'll be using our services, they'll be part of us, so let's, through a design, make them feel more welcome." 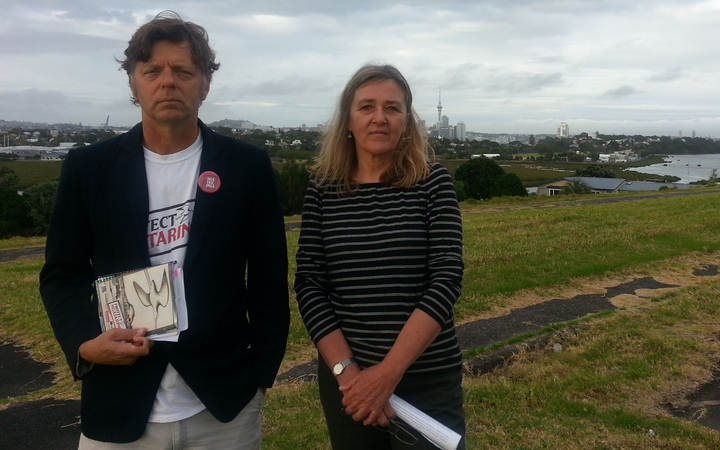 Iain Rea and Trish Deans are part of a Devonport residents' group appealing the consent for a 600-bed retirement complex to be built in the Auckland suburb. Photo: RNZ / Joanna MacKenzie

Ms Deans was part of the newly formed Devonport Peninsular Precincts Society, which has lodged the appeal.

Another member, Iain Rea, said the planned village was much bigger than the three-storey buildings they had expected to make up the development.

"[The buildings are] up to six-storeys with overlapping buildings for effectively two residential blocks, creating a very vast wall on the edge of Ngataringa Bay," he said.

The consented plans are for a 120-bed hospital, 195 apartments and 78 assisted-living suites, as well as a car park for 269 vehicles.

At a hearings panel last year, more than 300 people submitted against the plans, with fewer than a third of them in favour.

One commissioner, urban planner David Serjeant, wanted to refuse consent, but it was passed with a spilt decision by the other two commissioners.

"Things like design and bulk of the building and visual dominance, and you have to balance those against the intensification," he said.

A local architect, Geoff Richards backed the appeal because the complex would not blend in with the surroundings.

The design was monolithic and unsympathetic to the environment, he said.

"The solidity and the unrelieved nature of this development prevents it looking significantly different from a prison," he said.

Mr Richards described the design as a "ground-scraper" and said the length of the development is almost the same length as the Sky Tower if it was laid on its side.

Another concern was congestion on Lake Road, which already struggled with jams and delays, Ms Deans said.

"It's like the commissioners were able to put their fingers in their ears, as has council, and we're left with the traffic issue just sitting there unattended. It's unbelievable."

The commissioners were also not interested in taking up an offer by Ryman to reduce the size of the development, Mr Rea said.

He wanted that point to be addressed during the appeal process, which he hoped would form a precedent for future large-scale developments.

"If this decision stands it looks like we're heading back to post-war Britain where we build huge houses estates that you later have to tear down 30 years later because you've created slums."

"And at the moment that's where is looks like Auckland is going. So look out Auckland," he said.

In a statement, Ryman Healthcare managing director Simon Challies said the company was disappointed about the appeal, but remained absolutely committed to building in Devonport.

"We prepared a robust proposal which received consent, and we are confident we can work through the issues raised in the appeal."

The company said there was huge interest in the village from potential residents, and it hoped the issues could be worked out quickly.