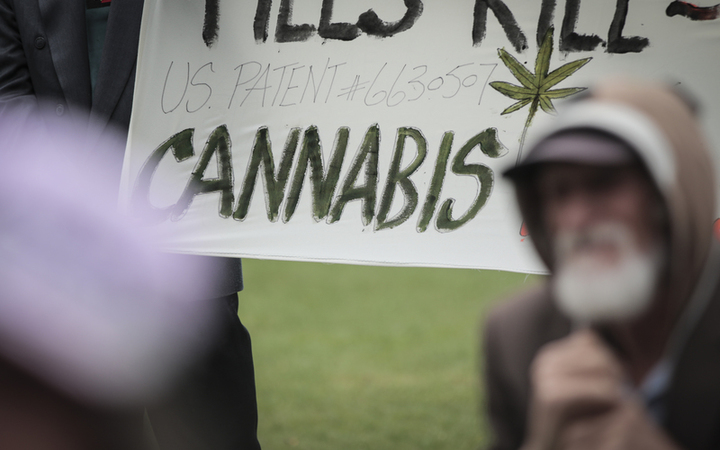 Instead, he has delegated approval to the Health Ministry.

For "additional clarity", he would provide doctors and other health professionals with a list of internationally-available products that were either pharmaceutical grade or good manufacturing practice certified, he said.

Rose Renton's son, Alex, who suffered severe seizures prior to his death last year, was the first person in New Zealand to be granted an exemption to use one of the drugs after Mr Dunne approved it as a one-off treatment.

Ms Renton said the change upheld the relationship between the patient and the doctor, without government interference, but more must be done.

"We've still got a price problem - $1200 for one month's prescription is unaffordable and we should have access to cannabis which is affordable. And maybe that's the politicians' next step."

"We're starting to master that approval process and taking Peter Dunne's signature out of the equation's not going to speed things up much - it's really down to the Ministry of Health becoming confident in the products people are applying for."

However, having a list of products available on the ministry's website meant doctors would be able to easily get information about products, and their pros and cons.

His group had previously researched alternative products for applicants to put forward, all of which had been approved, he said.

Dr Huhana Hickey, an academic who has multiple sclerosis, said the announcement was not a step forward, but more of a shuffle.

"The government needs to look seriously and get realistic. Have a bipartisan approach and look through all the parties and find the best policy that's safe that can be implemented and do it quickly, stop mucking around it's time they moved on it," Dr Hickey said.

"Ironically though it's interesting that they suddenly want to talk about this. Is it because it's election year? Will they actually do anything or is it just going to be empty talk. I would like to see some action on the ground now, not waiting for an election."

Dr Hickey said people who purchased medicinal cannabis on the black market needed to step forward and apply for products through the Ministry, in order to send a message to the Minister.

She said she knew of many people that would not be able to afford the price of the legal products, but it was something that needed to be done.

"The importation of cannabis-based products is quite expensive and that's a key part of the cost. Sativex is almost half the price back in the UK where it's made.

"What we really need to do is get some manufacturing to a high standard here in New Zealand."

Mr Le Brun said there could be scope for medicinal cannabis to be produced locally in a few years' time.

Drug Foundation executive director Ross Bell said there was a privately funded research project looking at the commercial production of cannabis-based products in New South Wales at the moment.

He said once the results were out, New Zealand could piggy back on its findings and use that to start up local operations.

He said in the meantime the real win today was the commitment to compile a menu of products that the Ministry of Health would do due diligence on.

"At the moment a patient and a specialist have to be the ones that pull together a whole lot of detail around what the product is, how it was made, how can you guarantee its safety and so on.

"We've been saying for a long time that the Ministry of Health is better placed because of its relationships with other ministries of health in countries that do have medical cannabis regimes such as Canada and The Netherlands."

Medical Association chair Stephen Child said today's move was not a breakthrough and there were many restricted medications in New Zealand that needed to meet conditions before they were given out.

"It's just moving a product into the usual regulatory systems that we have in place to protect the public and protect the vulnerable."

Labour's health spokesperson Annette King welcomed the change, but wanted an assurance it would actually result in improved access.

"When a specialist makes an application to the Ministry of Health, what products will they be able to access, how long will it take the ministry to process the application, before they can get access to a product?"

Greens health spokesperson Julie Ann Genter said the change was a step in the right direction but more needed to be done to help those who were sick and needed access to such medicine.

No change on recreational cannabis

Mr Dunne said the changes should not be seen as a step towards the decriminalisation of recreational cannabis, as that was "off the agenda" for the government.

The National Drug Policy talked about a "proportionate response" in sentencing, he said.

"There's work being done on that at the moment ... and if you talk to the police about priorities - I'll give you a 'for instance' - people who use cannabis for medicinal reasons, the police don't take any interest in.

"We have a sort of effective depenalisation when it comes to low level use of cannabis.

"Whether that will be more formalised in the future, I don't know, but I really don't think it's a huge problem."

Mr Dunne said his view of medicinal cannabis products had not changed radically in the last years.

"I think my view has sharpened, in that there are some that are potentially effective, there are a number that are of a lesser standard, but this is a rapidly evolving area.

"The issues that are now emerging are not so much about the products themselves but the regulatory regimes under which they are presented."

Mr Dunne said a feature of the recent debate had been that "public clamour" had always been far in excess of the actual demand.

"In the two years that I've been dealing with cases in New Zealand, seven have come to me for approval - all seven have been approved."

The Health Ministry says since 2008, it has approved 163 applications for Sativex - a pharmaceutical-grade product which the ministry already has delegated responsibility for.