The Whitianga community is rallying to help those left destitute after a large scrub fire burned through homes and property.

The fire started on Tuesday and destroyed six homes between Kaimarama and Coroglen. It is expected to take several days to extinguish, with full efforts - including helicopters with monsoon buckets - resuming at 6am today. 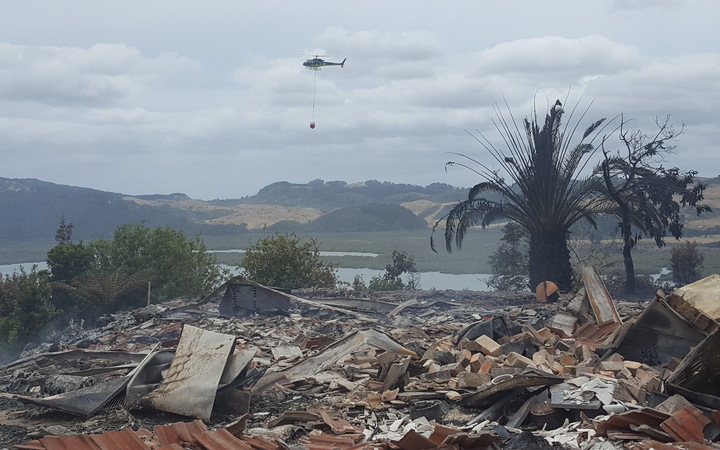 A monsoon helicopter flies over the remains of a house razed by a scrub fire near Whitianga. Photo: RNZ / Carla Penman

Its electricity and water supply was also severely damaged.

More homes were evacuated late yesterday because of an expected wind change overnight, but the change did not eventuate.

In a statement Wilderland thanked the Whitianga community for its "immediate, extensive and amazing" support. It said Wilderland would recover and be in a "stable state for winter."

Many of those who had been living in the commune are now staying at the Riverglen Holiday Park.

Park manager Gemma Richards said they were "resilient people" and could stay there as long as they needed.

Closer to scene of the fire, residents and fire crews have been based at the home of Amy and Craig Hodge.

Local resident Louana Skelton's home escaped the fire so she was there helping out.

"There's been offers of beds and people to come and stay and the amount of food that's been delivered and dropped off to here, and also to the Riverglen camp, has been overwhelming.

She said many residents stayed at the Hodges' home on the night of the fire but have now made other arrangements with friends and families or at motels.

"To be honest I think a lot of people are in shock, the ones who have lost their homes. Of course they're in serious shock so they're just trying to come to terms with that at the moment.

"They'e all very thankful for all the help and support they've been giving so I don't think any of them are maybe thinking too far ahead at the moment." 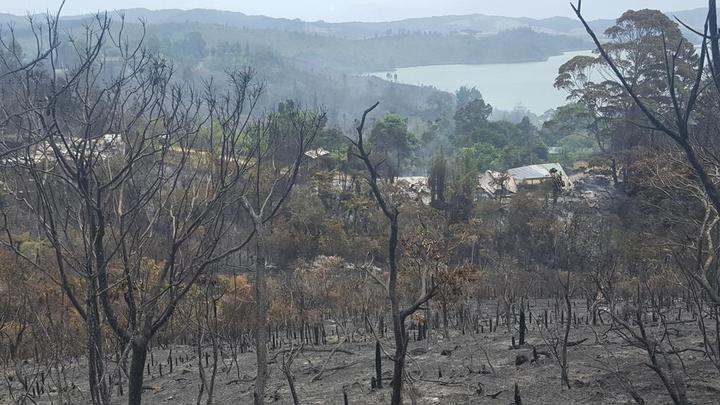 The charred remains of the Wilderland organic commune beside the Whitianga estuary. Photo: RNZ / Carla Penman

Thames Coromandel District Council said yesterday about 24 structures had been destroyed and 100 hectares of land burnt through.

Coromandel Civil Defence Controller Garry Towler said everyone was safe and had a place to stay.

Among them were tourists who lost all their possessions, but he said most of the people being looked after were the residents of Wilderland.

Yesterday afternoon affected residents met with council staff, Ministry of Social Development staff and local welfare groups to talk about how to get help.

The council has also set up a Mayoral fund to help and as of last night a Givealittle page set up by a former Wilderland resident had raised more than $3000.