A New Zealand father who was missing at sea with his six-year-old daughter on a tiny catamaran for 27 days says he was never in danger and that a broken rudder forced him to sail to Australia. 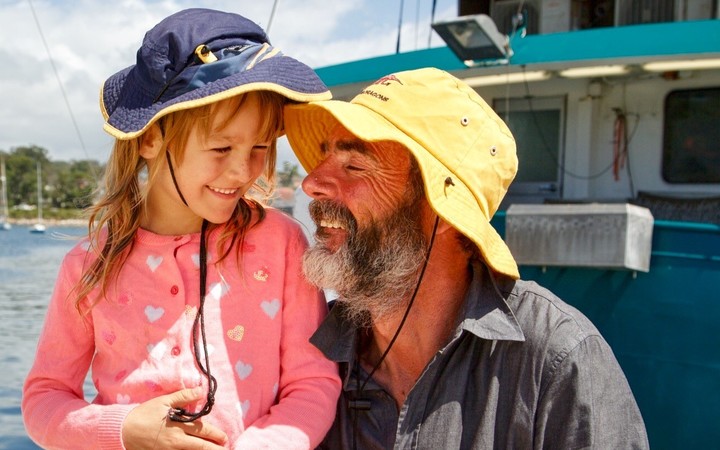 Alan Langdon and his six-year-old daughter spent 27 days at sea, including sailing from New Zealand to Australia - a distance of about 2600km. Photo: Courtesy of ABC News, photographed by Greg Nelson

Alan Langdon left Kawhia Harbour on a tiny catamaran with his daughter Que on 17 December and said his original plan was to sail north to the Bay of Islands in time for Christmas.

However, he turned up about 2600km off course in Ulladulla, New South Wales, on Wednesday.

What could have been passed off as an innocent summer adventure took an odd turn when the girl's mother, Ariane Wyler, who is estranged from Mr Langdon, hired a child-recovery service in an attempt to locate the pair.

When one of the boat's two rudders broke four days into the trip, Mr Langdon said they had to abandon their plans.

"Once we had no rudder, we didn't have as many options," he told ABC.

"We waited for the fine weather [so we could fix it]. At that stage, we were being pushed south and out. I didn't realise sailing with one rudder was going to be as difficult as it was."

Listen to Alan Langdon describe his journey in this video from the ABC:

A NZ yachtsman and his 6yo daughter have drifted into the NSW South Coast after being missing for three weeks pic.twitter.com/laHj6oXm33

He said he had no idea he had been reported missing in New Zealand, and did not realise he would be sailing into a media storm.

On New Year's Day, he decided to heading to Australia would be the safest option.

"I knew we'd arrive somewhere in Australia. I knew we had plenty of fresh water," he said.

"It was just a question of time. I didn't want to push the boat."

New Zealand police on Wednesday confirmed the duo had arrived at the coastal town, about 225km south of Sydney, on Mr Langdon's catamaran.

Col Chapman, the Australian child recovery expert hired by Ms Wyler, said he had suspected Mr Langdon would attempt the near 2600km journey.

"Despite initial thoughts to the contrary and, nothing against the New Zealand authorities, they did think it [the journey] was foolhardy and that no-one in their reasonable mind would attempt it, he did," Mr Chapman said. 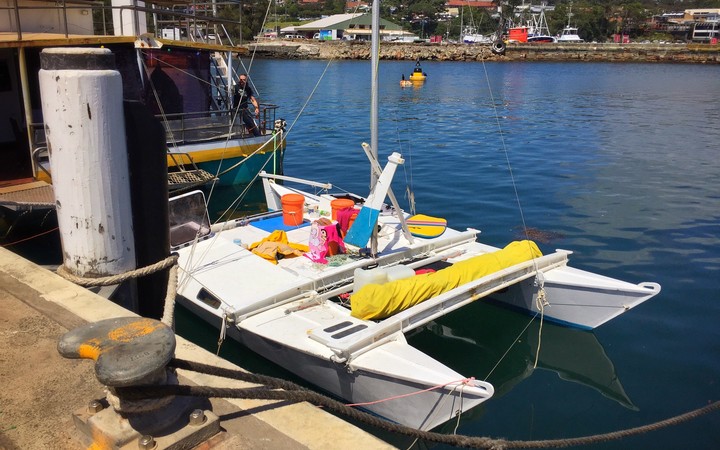 It was reportedly the second time that Mr Chapman had been hired by Ms Wyler to look for the pair after he found them living in rural New Zealand more than a year ago.

He was talking to Australian officials, and New Zealand police were waiting for more information about Mr Langdon's crossing of the often-stormy Tasman Sea.

But Ms Wyler always thought it was possible Mr Langdon would attempt to reach Australia.

"He knows the sea, he knows the wind, he understands that," she said on Friday.

Mr Chapman said he had spoken to Ms Wyler and she was "elated and thrilled and beside herself with glee" that her daughter was safe.

He said he thought Mr Langdon should face charges, as he had left New Zealand and entered Australia illegally. Que had no passport, he said.

In a statement, New Zealand police confirmed they would assess "the background" to the matter before taking further action.

The Australian federal police confirmed they would assist authorities in New Zealand.

Mr Langdon and Que would remain on the southern New South Wales coast to fix the damaged rudder on their boat before sailing north to Port Kembla for official border processing.

'Once you're out there, it can be anyone's guess'

An experienced yachtsman, Alan Pattie of Nelson, earlier told RNZ the type of boat Mr Langdon sailed was entirely capable of the journey, which was about 1180 nautical miles, but it would have been foolhardy to deliberately take a child.

He said the journey was not entirely remarkable for an experienced sailor, as the type of catamaran owned by Mr Langdon had sailed around the world.

"The Wharram catamaran, which he sailed on, is basically a copy of a Polynesian catamaran, and they're surprisingly seaworthy. They've been proven over time to be quite reliable for sailing long distances - but that was one of the smaller ones, the 21-footer."

Mr Pattie said at the time of their departure from Kawhia, the weather was not ideal.

"I would say he had some fairly awful weather getting out of here, but once you're out there it can be anyone's guess. The guy's obviously a competent sailor, but it was highly irresponsible to go to sea with a six-year-old kid."