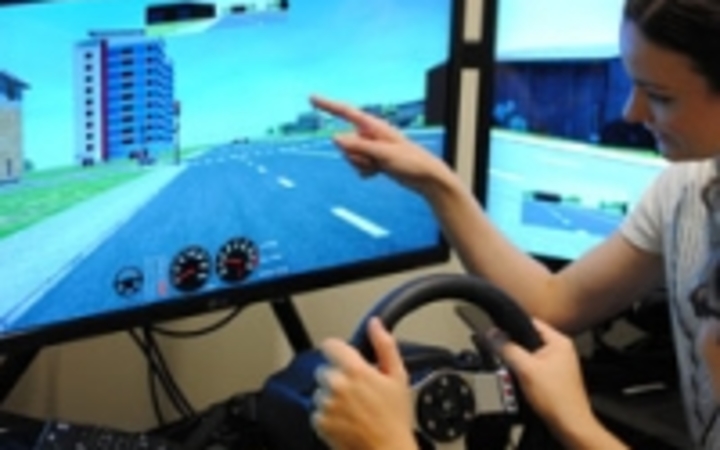 Speed limits are more strictly enforced over holiday periods in an attempt to curb the road toll. Photo: Supplied / University of Western Australia

Every summer and long weekend, the police drop the threshold for issuing tickets from 10 kilometres per hour over the speed limit, to just 4kmh.

In Australia, some states have gone further, reducing the threshold to just 1kmh.

In a peer-reviewed experiment, psychologist and study author Vanessa Bowden varied the speed threshold at which a ticket would be given, setting it at 1kmh, 6kmh and 11kmh.

She found that when the threshold was set at 1km/h over the speed limit, participants missed two percent more targets in their peripheral vision - where road signs and hazards often are - and they also found the cognitive workload of driving to be higher.

"From a scientific perspective we can say it is a significant impairment, so it makes a noticeable difference," she said.

Dr Bowden said that could have unintended consequences on a driver's cognitive and visual resources.

"Drivers consider it more demanding to drive when the speeding threshold is just 1kmh over the limit," she said.

"They were slower to detect and missed more of these dot-targets that we showed them when the threshold was 1kmh over the limit."

Even a small effect of 0.1 percent could potentially lead to thousands of injuries or fatalities each year, because there were so many people on the roads each day, she said.

However, she said more research was needed to prove the effect.

AA spokesperson Dylan Thomsen said a majority of the association's members supported the tighter enforcement tolerances, so long as they were not too strict.

"We think that the enforcement should be focused where the risks are highest," he said. "Our members have told us they think motorways and passing lanes should retain a 10kmh tolerance.

"It's good to use these tools to try and make people think a bit more, but you want to focus your enforcement where the risks are. You need people to buy into it," he said.

Assistant Commissioner for road policing Dave Cliff welcomed the study and its conclusions, but highlighted another of its findings: that drivers' average speed also dropped when the threshold was lowered.

"While there's a distraction enforcing at 1kmh, the crash reduction benefits if you could reduce speed by 2 or 3kmh on average are massive," he said.

"That's between about 10 and 15 percent trauma reduction.

"That's huge numbers of casualties who are not being hospitalised, seriously injured, and potentially killed, by getting those speeds down."

Speed was one of two basic messages Mr Cliff focused on, the other being that seat belts saved lives - a message he said did not get through in 2016.

The number of people who died while not wearing a seat belt in car crashes increased by half, from 60 to more than 90 deaths.

"In 2016 we saw this enormous rise in the number of people who were killed who weren't wearing safety belts - the simplest, most effective safety device that's ever been invented," Mr Cliff said.

Police had asked the Ministry of Transport to find out what was behind the rising number of road deaths, but that the report might not be out for months, he said.