The country's only convicted plane hijacker has almost completed her prison sentence and is threatening to hijack another aircraft if she gets the chance. 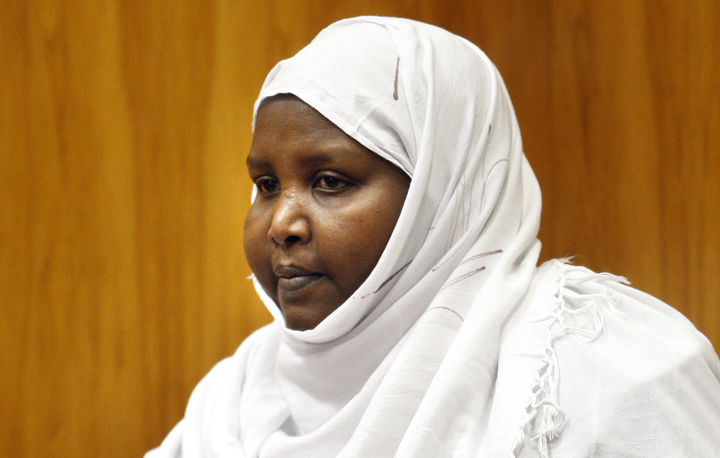 Asha Abdille was sentenced in the High Court in Christchurch to nine years jail in 2010. Photo: David Hallett / The Press / Fairfax NZ

Asha Abdille stabbed both pilots on an Air New Zealand flight from Blenheim to Christchurch in February 2008. One passenger was injured in the incident.

The Somali refugee took knives onto the 19-seater plane, which was forced to make an emergency landing.

Abdille was sentenced to nine years in prison, and her sentence expires on 7 February.

She is currently held in a psychiatric unit in the Wellington region, but refused to attend her final Parole Board hearing in early December. A written summary of the hearing, obtained by RNZ, said Abdille was still classified as high risk and has "said that she will attempt to hijack another plane and has threatened to set herself on fire".

The decision noted no reintegration plan has been developed for the 42-year-old by the unidentified hospital she was held in. But it said "work is being undertaken by the hospital together with the [Corrections] Department about the best way of managing Ms Abdille in the future".

The Parole Board went on to say hospital staff have "ongoing concerns about potential risky behaviour in the community on any release". A 2014 report said Abdille had agreed to trial an antipsychotic medication, Clozapine.

It is understood Abdille, who is currently regarded as a special patient, will transfer into the mental health system on a compulsory treatment order (CTO) when her sentence ends next month.

The Ministry of Health would not answer questions about its ongoing oversight of Abdille. But it provided generic information to RNZ, saying "decisions about leave and remaining on a CTO become the responsibility of his or her responsible clinician rather than the Director of Mental Health".

In May last year, Parole Board panel convenor Judge Mike Behrens QC said he was "aware of the psychiatric opinion that Ms Abdille's treatment will continue for some two years or so if not longer".

In December, the four-member panel set release conditions for Abdille, but they can only apply for six months after her sentence end date of 7 February. Corrections would only say it "will manage this offender according to her conditions".

Abdille's case will not go before the Parole Board again. Her lawyer, Judith Fyfe, had no immediate comment on the December ruling or the path ahead for the convicted hijacker.

In 2009, the International Airline Pilots Federation presented the two pilots, Dion McMillan and Ross Haverfield, with bravery awards. Through a spokesperson, Mr McMillan declined to comment about the looming end of Abdille's sentence.