A new plan proposing a safe and "ultra-careful" way to re-enter Pike River has been released by families looking to recover bodies from the mine's shaft.

The government says the report has omissions, but it is willing to consider it. 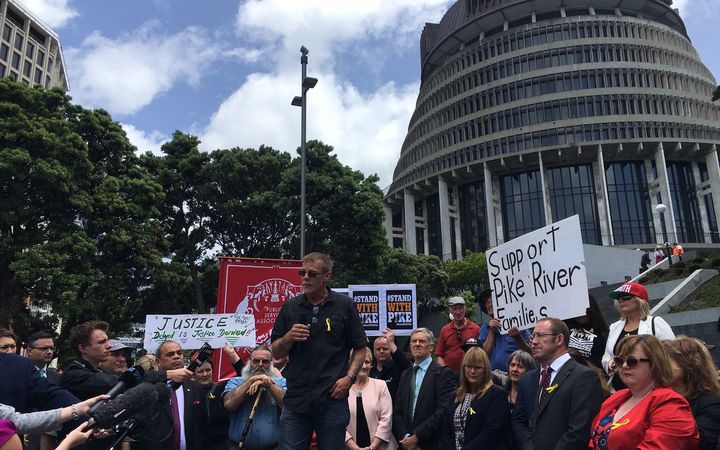 Families of the Pike River Mine disaster victims and their supporters gathered outside Parliament to release a new plan for entering the mine. Photo: RNZ / Rebekah Parsons-King

Twenty-nine men died after an explosion in the mine in 2010 but their bodies have never been recovered.

The re-entry plan was presented outside Parliament in Wellington today by a group of families and supporters, including Bernie Monk, Anna Osborne and Sonya Rockhouse.

"We want justice and we want this drift re-occupied," Mr Monk told the small crowd.

The plan was co-authored by the vice-chair of the UN Group of Experts on Coal Mine Methane, Dr David Creedy, and former UK mines inspector Bob Stevenson.

It proposed using an internal pipe to pump nitrogen into the mine's 2.3km drift - causing the methane to rise - and then using external bore holes to release the gas.

Dr Creedy said the method was ultra-safe, easily monitored and removed any possibility of the methane gas mixing with fresh air, which could cause an explosion.

It would also stabilise the inside of the mine without anyone having to enter until it was safe to do so.

"This is ultra-careful, belt and braces. In a normal standard coal-mining environment we manage interfaces between air and methane, and we can do that - that's standard mining practice.

"Here, we'll take it one step forward and make it ultra-cautious to make sure we absolutely minimise any potential hazard."

Listen to today's announcement outside Parliament:

Karl Barkley walked from the West Coast to Wellington for the protest:

Dr Creedy said the government would have to step in and take ownership of the mine and the re-entry, as Solid Energy had insisted any attempt to enter the mine was too dangerous.

"To get any movement, the obvious direction is: put it in the hands of government. They should be able to speak on behalf of the people and decide what happens."

Mr Creedy said there was no reason why the government should not adopt his approach, as it was safe, and did not utilise any techniques that had not already been successfully used at the mine, after the disaster. 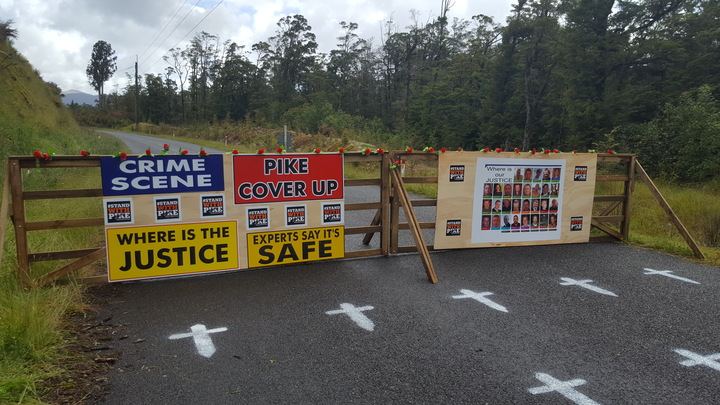 Protesters have been gathering at a checkpoint near the entrance to the mine. Photo: RNZ / Maja Burry

Ms Rockhouse, who lost her son Ben, said the new plan showed it was time the government sat down and negotiated re-entry.

"These experts that Bernie has used are the best in the world, they wouldn't be even putting their name to a bit of paper if they had any doubt about what was going on."

Joe Hall, who helped to raise another one of the men who died, Daniel Herk, said the families were hopeful that the government would fully consider the experts' findings.

Little would commission independent report, Peters would enter mine

Environment Minister Nick Smith said the families' report was in a preliminary form, but the government would be happy to sit down with them to discuss it.

"It doesn't detail the methodology that would be used, it doesn't have approval from WorkSafe that would be required for any re-entry, but I do want to give the courtesy of carefully looking at what is being proposed to see whether there is potential for any discussion."

New Zealand First leader Winston Peters said he believed the report was sound, and he was willing to be part of the first group to enter the mine.

Mr Little told the crowd he would commission an independent report on whether re-entry would be safe if Labour was elected next year.

"I promise you, when we are the government, one of the first things we will do is make sure we get an expert to look at it, and if it's safe to go in, we will back you to get someone to go in."

State-Owned Enterprises Minister Todd McClay said the facts around whether or not it was safe to re-enter the mine had nothing to do with Solid Energy owning the mine.

He ruled out putting the mine under another government entity's control.

Prime Minister Bill English said yesterday he was prepared to meet the group, but not today, and stressed it was not up to politicians to decide if re-entry was safe.

West Coast Tasman MP Damien O'Connor, from Labour, said Solid Energy was a government enterprise that had taken a zero-risk approach to re-entry, and this was completely unrealistic.

"Bill English is in charge, he was Minister of Finance, he is now Prime Minister. I think he is in a good position to make a different call, to listen to the families and listen to the expert evidence that says this is possible."

Solid Energy, which bought the mine assets two years after the disaster, has said it has been told by WorkSafe to seal the mine.