The Ministry of Social Development (MSD) has sought a discharge without conviction over a charge relating to the fatal shooting of two staff at its Ashburton office in 2014. 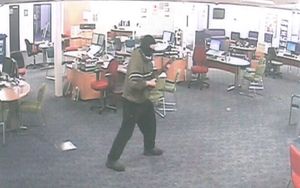 Russell John Tully in the Ashburton Work and Income office during the shootings Photo: Supplied

Peggy Noble and Leigh Cleveland were shot dead by Russell Tully in the Ashburton office in September 2014.

The ministry had earlier pleaded guilty to a charge of failing to take all practicable steps to keep its staff safe, but disputed WorkSafe's claim that the office layout was unsafe.

But Chief District Court Judge Jan-Marie Doogue ruled barriers should have been installed to protect staff.

Today lawyers for WorkSafe and the ministry made submissions at a sentencing hearing in the Wellington District Court.

MSD lawyer Brent Stanaway said Judge Doogue found at the end of a disputed facts hearing that there was no way of foreseeing what Tully was going to do.

The judge will deliver a written decision on the sentencing tomorrow.