Claims that staff at a Dunedin special needs school hit, sat on and force-fed children as young as five have led to three investigations - by police, an independent investigator and the Ministry of Education.

One staff member has quit, another is suspended, and an employment investigation is under way at Sara Cohen School. 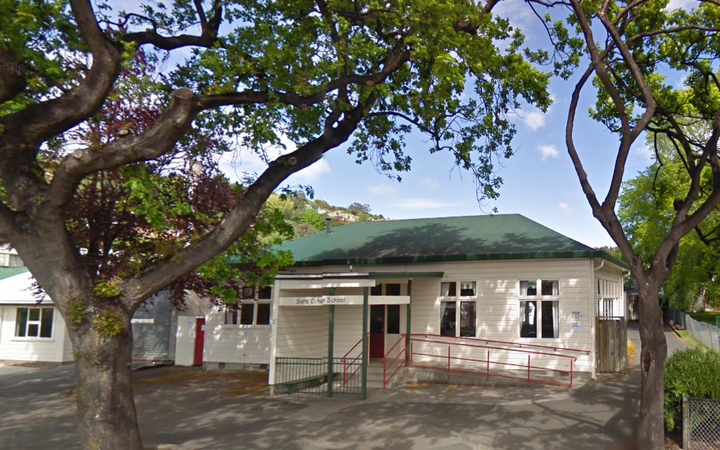 An independent investigator was called in to Sara Cohen School. Photo: GOOGLE MAPS

Police investigated the school after a parent complained in February. They have recently finished the investigation, and said "unless further evidence comes to light no charges will be filed".

RNZ has been told there were 11 sworn affadavits from teachers and teacher aides about children being abused - including being hit, force-fed fruit, and having their wrists bent backward.

Another source said teaching staff had sat on children, pinched their nail cuticles, and tackled them to the ground.

Nearly all the eight or nine pupils of at the Sara Cohen junior class, aged between 5 and 10 and mostly with autism, are non-verbal.

Some were put in a seclusion room regularly, which appears to have been used for longer than two years.

The room is a laundry, with a hasp high up on the outside of the door and the light switch outside the room. It has no windows and is located within a classroom on the grounds of another school, Concord.

The Ministry of Education called in an independent investigator, veteran school principal Mike Corkery. The ministry declined to release the investigation to RNZ, saying Mr Corkery might have to ask parents and staff more questions and handing it over would make people fearful about confidentiality.

But Mr Corkery finished up months ago - and the ministry now cites the employment investigation, by limited statutory manager Nicola Hornsey as the hold-up.

This was two months after the ministry was told about parents' concerns.

It was also two months after the Education Review Office, which inspected the school in February, told staff it would get a glowing report.

ERO changed its report later, in July, to say the intermediate and senior classes were good, but that the school's board did not know enough about what was going on in the junior class at Concord, and had weak monitoring.

The ministry said Ms Hornsey was monitoring children's health and safety and looking for a better way for parents to make complaints.

A spokesperson for Sara Cohen said it did not permit use of seclusion any more, after a limited statutory manager was appointed by the Ministry of Education in April.

The revelations also come after the government this month said it would ban seclusion rooms, after it emerged Wellington's Miramar Central School had been locking autistic children in them.

The ministry was also forced at the time to release its investigation into that school's use of a seclusion room, and apologised for not handling parents' complaints urgently.

The Ministry gave a statement to RNZ about Sara Cohen School last night.

"We can confirm that one staff member has since resigned from the school and that a second staff member has been suspended while the LSM [Nicola Hornsey] carries out an employment investigation," it said.

"Some of the allegations made about the treatment of students in the school, including the previous use of seclusion, were very concerning - but they are also subject to dispute.

"The employment investigation is attempting to resolve these issues, so it would not be appropriate to comment further on them at this time.

"The board chair and the principal have personally assured us at a board meeting that seclusion has not been used this year."

In a statement, Ms Hornsey said the "the use of seclusion is not permitted at Sara Cohen School and ... student safety is our paramount concern".

Concord school principal Steve Turnbull said Sara Cohen School had governance of the junior class in the room on his grounds.

He said none of his school's pupils had ever been put in the seclusion room.

Neither Sara Cohen principal Raewyn Alexander nor board of trustees chair Sharon Oliver would comment.

The Education Council has been notified.