An eruption in Lake Rotorua early this morning caused a geyser of water to shoot metres into the air.

The hydrothermal eruption, about 4am, was so loud it woke residents at Ohinemutu, the village of Ngāti Whakaue, about 10-minutes walk from downtown Rotorua. 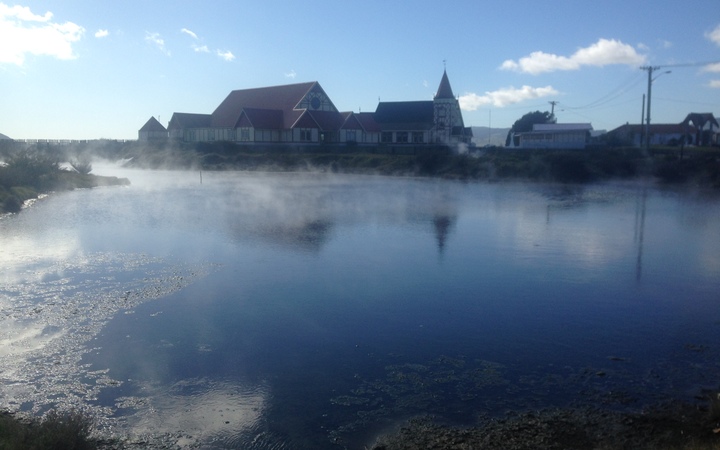 The eruption was so loud it woke residents of Ohinemutu. Photo: RNZ / Veronica Schmidt

The Rotorua Lakes Council said a build-up of steam pressure caused the eruption and, while the geyser was spectacular, there was nothing to worry about.

Council geothermal inspector Peter Brownbridge likened it to a cap blowing off a well-shaken bottle of fizzy drink.

"It must have been quite powerful to throw up a big column of water as it did but it's nothing for people to be concerned about," he said.

Lani Kereopa said the explosion was about 25 metres from her bedroom. Itt generated a wall of water as high as her two-storey house, she said.

In a video on Facebook early this morning, Ms Kereopa said she was woken by strange sounds outside her house on the lakefront about 4.30am.

"I was lying in bed and I heard what sounded like six or seven loud thuds with what I know now was spray, water spray, happening afterwards," she said.

She got up and looked out of the window, and at first didn't see anything unusual.

"And then another one happened, and I saw water spraying up out of the lake. Just at the mouth of the Ruapeka. It was higher than Pohutu [Geyser] and it was a whole lot of water.

"I panicked, ran downstairs to wake everybody up to say 'get out of the house, get out of the pa, the village is erupting' ... We got in the car, we came up the Lake House car park here, and we've sat here for the last hour just watching to see if anything else was going to happen."

Volcanologist Brad Scott said there was a low probability it could be a consequence of the recent earthquake sequences in Kaikōura or the East Cape.

It was more likely to be related to behaviour in the Rotorua geothermal system, he said.

"It is a little bit unusual. They're driven by steam, so it's just a bit more steam than normal coming to the surface and being restricted in its flow to the surface, creating an over-pressure situation.

"They're certainly not unknown in that area. Quite a few have happened - certainly back in the 1960s, there was even much much larger ones."

Mr Scott said such eruptions could pose a small danger to people out on the lake but he didn't believe there was a large risk to the public.

They were yet to establish if the eruption could be a sign of more activity to come, he said.