An Auckland lawyer has been found guilty of dangerous driving causing injury after she backed into a furniture removal man who was helping her ex-husband. 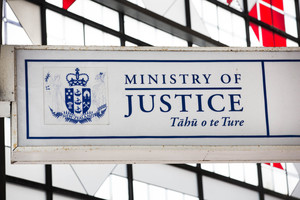 The court was told Tabb arrived home one day in June last year to find her ex-husband and removal men loading furniture into a truck.

She parked over the driveway to stop them leaving and after a two-hour standoff reversed into Thomas McAndrew as he directed the truck around her.

Tabb's lawyers said she feared she would be killed or seriously injured when the truck came down her driveway.

But Crown prosecutor Karen Chang said there was no imminent danger to Tabb and instead she had been aggressive and antagonistic.

In her closing address, Ms Chang said the furniture truck was fully laden and moving slowly - Tabb was not forced to make a split-second judgement.

She said the truck was actually veering left off the driveway and not heading towards Tabb. Instead, the plan was to drive over a small garden to allow the truck to avoid Tabb's car.

She said there was no danger to Tabb and she chose not to sound her horn or even wind down her window to call out.

Ms Chang said Tabb hit Mr McAndrew twice, leaving him with bruising to his hip and a broken finger. Ms Chang reminded the jurors that Tabb had told the court she had felt and heard nothing.

She said Tabb failed to check on Mr McAndrew and never showed any concern for the injuries she caused him.

Tabb's lawyer, Marie Dyhrberg, said her client might never have seen Mr McAndrew, who could have been standing in her blind spot.

She said the removal men planned to drive the truck at Tabb in the hope that she would get out of the way. They acted in secret to stop her thwarting their exit strategy.

She said as the truck came down the driveway Tabb believed she was in danger and had several thoughts going through her head. "What's going to happen to me? Will I be badly hurt? Will I die? Who will look after my children?"

Ms Dyhrberg said Tabb acted quickly to save herself, and her client would never intentionally drive into someone and risk her career and reputation for a few sticks of furniture.