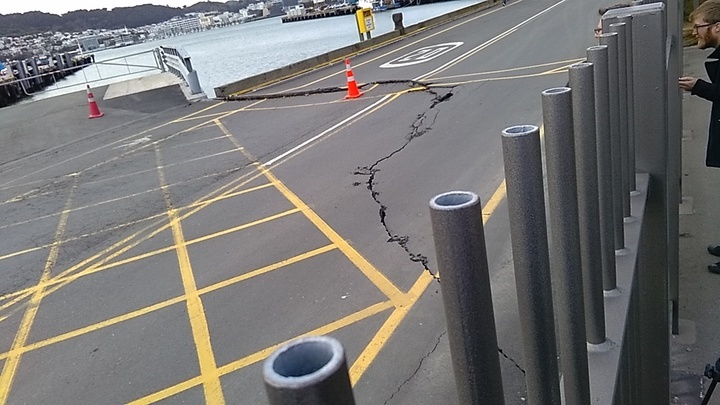 The full extent of earthquake damage to CentrePort is expected to be revealed on Friday, leaving the 200 staff with an anxious day-and-a-half wait to learn their future prospects.

CentrePort chairman Lachie Johnstone said torrential rain and gales in Wellington since Monday's quake had made it difficult to complete inspections of the wharf.

He told Morning Report experts would be able to get underneath the wharf to look at the structure of the quays today.

He could not say at this stage how long Aotea Quay, alongside the port, would be out of action.

"The Quay is absolutely critical to the wharf. There are parts of it that we believe to be relatively risk free ... we've got some of the support vessels for the Kaikoura effort booked in to come into the port today."

"The facilities of the port are being utilised but we're being very cautious, and it's early days."

CentrePort said earlier there was damage to some wharves and roadways, while liquefaction and differential settlement had left an uneven surface.

The regional council owns 75 percent of CentrePort. Chairman Chris Laidlaw said his organisation could be hit with lower dividends or none at all.

"There's no question that the port will be unable to provide much of a dividend, or any at all, for the next few years," he said.

"So we will have to find ways of compensating.

"That will be part of the broader appraisal of what we can spend and what we can't."

The BNZ building and Customs House were relatively unscathed.

The port suspended operations after Monday morning's 7.8 earthquake hit, but said yesterday it was partly operative.

Cook Strait ferries were restored to 75 percent by yesterday.

The oil terminal at Seaview, near Petone, is back in business, as is a rail line to get cargo off the wharf.

KiwiRail is moving export containers to other ports to maintain New Zealand's export industry. That raises the propect of lower earnings from CentrePort, even if the damage was repairable.