Peace activists plan to blockade a defence industry conference in central Auckland today, in an attempt to stop 700 delegates from attending. 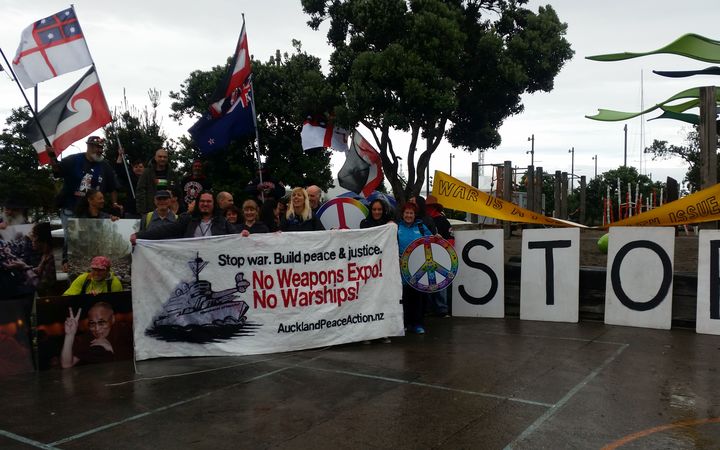 Protest organiser Auckland Peace Action called the forum a "weapons expo", which was attended by arms dealers from all over the world.

There would be no military-style weapons at the event, he said.

"We've got a couple of high-end personal weapons, rifles, which are no different from what you'd see at a hunting store."

The world's largest nuclear arms manufacturer, Lockheed Martin, was the main sponsor of the forum.

"We've come together to oppose the celebration of war, the glorification of war," Auckland Peace Action spokesperson Virginia Lambert said. 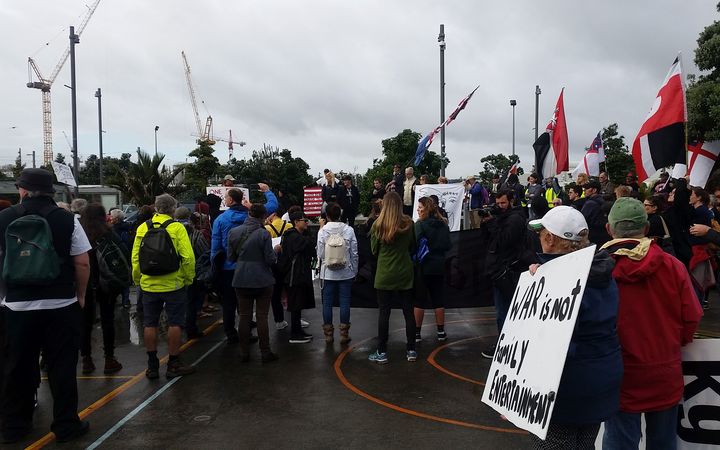 More than 50 people had joined the protest this morning. Photo: RNZ / Gill Bonnett

She would not say how many protesters there might be, but more than 500 people on the group's Facebook page had indicated they were planning to take part the blockade.

Protesters would be stopping delegates from entering the building, she said.

"We're prepared to stay there until forcibly removed."

Last year's event in Wellington resulted in the arrest of 28 protesters.

Mr Driver said he did not want a repeat of that and called for calm at today's event.

"That action was quite upsetting for our members and we wanted this year not to have the same experience of, I suppose, violence being executed against our members or guests," he said.

Today's protest coincided with the 75th Anniversary celebrations of the Royal New Zealand Navy on the Waitemata Harbour.

The event was brought forward a day because of expected bad weather.

Naval vessels from around the world, including American destroyer the USS Sampson - which does not have nuclear weapons - will take part.

It is the first time an American warship has entered New Zealand waters for more than 30 years.

Massey University senior lecturer in security studies Anna Powles said it was unfortunate the flotilla and the defence forum were happening at the same time.

"It's unfortunate as some of the shine will be taken off resumption of New Zealand-US relations."

Peace activists may see this as evidence of a strong remiliterisation of the New Zealand-US relationship, she said.

"However, let's see how that pans out under the new US administration."

Activists are planning a peace flotilla on the Waitemata Harbour on Saturday.