A magnitude 7.5 quake struck near Hanmer Springs at 12.02am on Monday morning, and was felt around the country. It was 16km deep and has been followed by hundreds of aftershocks. 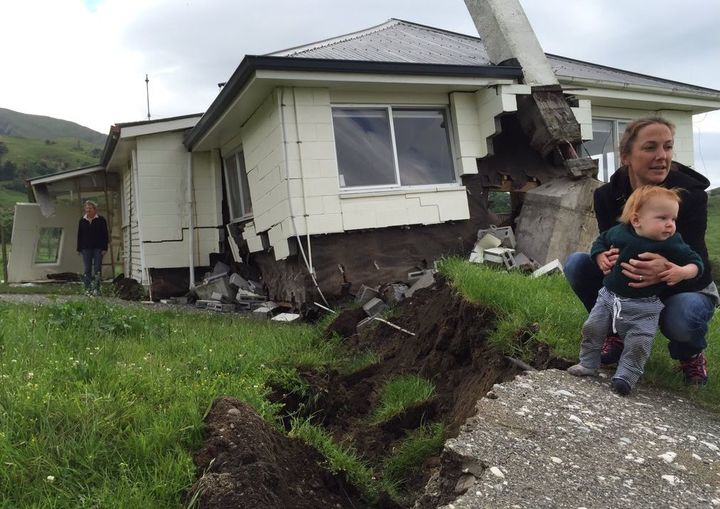 A house at Bluff Station between Blenheim and Kaikoura, which is right on the Kēkerengū faultline, was demolished by the earthquakes. Photo: RNZ / Alex Perrottet

As aftershocks continue to roll, stories are coming in of homes destroyed, animals driven mad and a potential billion-dollar clean-up. Here's our coverage so far:

Aftershocks may continue for months

Civil Defence and GNS scientists have warned people to brace for months of strong aftershocks.

GNS principal scientist Kelvin Berryman said given the size of the initial quake, the subsequent aftershocks "are about what we'd expect", and significant shakes could continue for months or years.

"Over the next several days it could continue much as it is, and the most likely future outcome is it just dying away over a period of time: months if not years, but there is always the possibility there could be more triggered activity on nearby faults."

Civil Defence national controller David Coetzee said both aftershocks and significant earthquakes were continuing. "That will go on for a number of days still to come."

Clean-up to cost hundreds of millions

The clean-up operation was also expected to take months, Prime Minister John Key told reporters during a flyover of the Kaikoura damage.

Mr Key and Acting Civil Defence Minister Gerry Brownlee estimated the clean-up would run into the hundreds of millions, possibly billions of dollars, and that clearing the debris and blocked roads could take months.

Enormous damage to some homes

RNZ reporter Alex Perrottet stopped at Bluff Station, between Kaikoura and Blenheim, to see some of the dramatic damage to houses on the fault.

"To watch this site from the air was just amazing, there's a house that was right on the faultline that had moved 10 or 15 metres," he said.

There was one man at the house at the time who didn't want to speak to reporters, he said.

"He was too freaked out really to speak to us, he had just returned home at around midnight and then this house had literally been ripped off its foundations, had moved up metres."

Anthea Prentice lives in Hundalee, just south of Kaikoura. She told Checkpoint with John Campbell the quake felt as if "giant hands" were shaking her house, which she believed was now beyond repair.

"I think the ground may be too unstable to build on again, the house I don't think will be salvageable, our chimney came down and took down our living room wall, so we can look straight out onto the sea. The front door was blown out by the force of it, and the whole unit, with the windows and the back doors are jammed open, holding up a very damaged looking wall.

"Major cracks right through the lawn and the land."

Richard Rutherford is a farmer and horse breeder in Parnassus, a small town just south of Kaikoura. Speaking to Checkpoint, he described the moments immediately following the quake as "like being in a biscuit tin".

"When I went outside in the 15 minutes after, the animals outside were just screaming, the lambs and the cattle, it was like weaning time - it was just unbelievable the scaredness of the animals.

More than 500 people from Kaikoura sought refuge at Ngāi Tahu's Takahanga Marae fleeing damage and uncertainty of the quake and aftershocks.

Ngāi Tahu kaiwhakahaere Sir Mark Solomon said people began arriving at the marae a little after midnight, and 500 had registered so far.

Exam chaos around the country

At the height of end-of-year exams, the quakes closed around half of all the schools in the affected regions. The Ministry of Education said 276 out of the 524 schools in Wellington, Nelson-Marlborough and Canterbury had shut.

The disruption was particularly felt by secondary school students sitting the six NCEA and two Scholarship exams scheduled for today.

The ministry said 44 of 97 secondary schools closed and were unable to provide NCEA exams.

The New Zealand Qualifications Authority said students who missed their exams, or who felt their performance was impaired by the disruption of the earthquakes, would be able to apply for a derived grade based on their performance in other assessments during the year.

Several buildings in the centre of the capital were damaged, with broken glass littering the streets, and people had been asked to stay away due to concerns about forecast high winds.

But the mayor, Justin Lester, said most of the inner city would be open as usual on Tuesday morning.

Wellington City Council emergency response manager Steve Cody said some parts of Featherston Street had buildings with broken windows and they might not be able to be repaired by tomorrow.

He said the council planned to put cordons in place to stop people accessing those areas.