The national controller for Civil Defence is confident support is getting through to Kaikoura, which appears worst hit by last night's 7.5 magnitude earthquake. 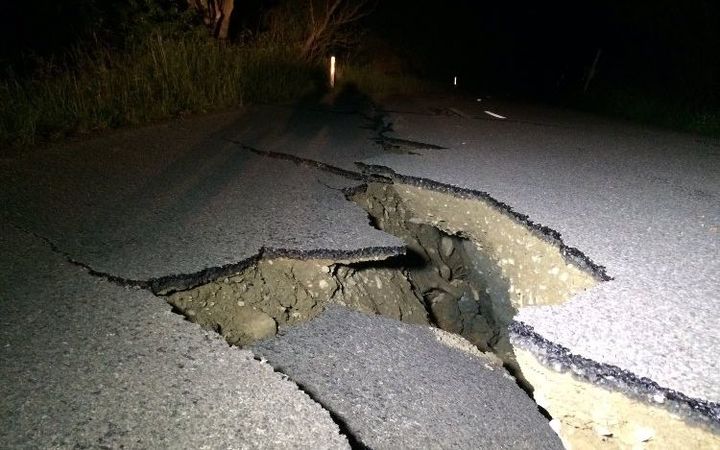 Landslides and damage to the road have cut the town off from outside help but David Coetzee said Civil Defence was getting assistance in from the air.

"Supplies are being transported in by helicopter ... as well as support personnel. Urgent short-term needs assessments have been made and these are being catered for through these helicopter drops."

Mr Coetzee said other transport options were also being considered.

"Our planning team's working on that. Defence, as well as our own people, are planning jointly on our options in that regard and from tomorrow on we'll have a better idea of how best to provide sustained support."

He said Civil Defence was talking to the New Zealand Transport Agency to assess how long it might take to re-open the road to Kaikoura.

Meanwhile, he said Vodafone expected to restore cell phone coverage to the area by the end of Monday.

Mr Coetzee confirmed two people had died and two had been seriously injured in the quake but he said he had no idea how many people might have suffered minor injuries.

He said the local hospital in Kaikoura was coping.

The first 7.5 magnitude earthquake struck at 12.02am, at a depth of 16km centred near Hanmer Springs.

It has been followed by a series of large earthquakes across New Zealand up to 6.2 in magnitude, which prompted tsunami alerts, causing residents of coastal areas to flee inland.

Most were in the upper South Island, in Seddon and Kaikoura, but a 4.9 magnitude earthquake hit Paraparaumu and a 4.9 hit Wellington in the early hours.

The helicopter is now flying to Kaikoura where the group will land and look at the damage on the ground.

Canterbury District Health Board said three people had come in with quake-related injuries this morning, with two of them from Kaikoura.

A spokesperson said a man and woman from Kaikoura, both in their 50s, and a man in his 60s from North Canterbury, were all in a stable condition.

It said Urban Search and Rescue teams were flying into Kaikoura this morning and depending on their assessment, some patients in the area could be evacuated.

She was having a break in Nelson when the earthquake hit shortly after midnight. She had been unable to reach her son or friends in Kaikoura as both landline and cellphone connections remain down.

She received only a text message from a friend saying her house was "a hell of a mess".

Ms Beazley owns Barnacle Bills Accommodation at the south end of the town. She had already had guests cancel their bookings, but had no idea yet how bad the damage was.

"It's going to be devastating for Kaikoura businesses. People aren't going to be able to get in and out."

Kaikoura jewellery shop Jade Kiwi owner Cezanne Lyons posted on Facebook: "My business is in tatters and our house is upside down. But what matters is we are all safe and alive."

Beazley said: "I just don't know what to feel. Things can be replaced, but lives can't."

Kaikoura MP Stuart Smith said there had been extensive damage to roads and bridges, with shoulder-deep cracks in the ground on the road south to Kaikoura.

"The road is quite damaged with cracking, with slips and the bridges, some of them are really difficult to get across.

"We have in some of them cracking on the bridge itself."

He said he would do a fly-over of his electorate soon, to assess the damage, and advised people to check on their neighbours, particularly in those areas still cut off and where communications were limited.

Flaxbourne River Bridge north of Ward was closed due to earthquake damage, along with Wairau River bridge in Blenheim.

Spark said its phone networks in Clarence, Kaikoura, Weld Cone, Waiau and Eltham in the South Island have been affected. People should text rather than call if possible, it said.

Erin Smith, who lives in Long Creek about 20 minutes south of Kaikoura, said there had been several slips in the area.

A bed and breakfast owner near Kaikoura, Steve Horrell, said early this morning he and his neighbours had climbed a hill at the back of their property due to the tsunami warning.

"Well there's a lot of damage on the property, it looks pretty much superficial but there's a lot of smashed glasses and all of the cupboards opened up and things fell out and alcohol and whatever.

Mr Horrell said it was difficult to assess the scale of the damage while it was still dark.

A Red Cross team was also on the way to the small Marlborough township of Ward where there is concern over the extent of damage.

About 80 people were understood to be gathered at the Ward Motels which was being used as a welfare centre.

There also appeared to be widespread damage to the roads and bridges around Ward and roads are closed.

Marlborough Lines, which covers the area north of the Clarence River, said its network south of Seddon remained shut down while it was being assessed. That was affecting 1000 homes and businesses

GNS Science seismologist Bill Fry said the faultline of the largest earthquake extended out under the seabed off Kaikoura.

"The waves in these regions will continue to be large for some time and they will taper off as time goes by.

"We will try as quickly as we can to update you with when we think that it's safe to do things or we think that the wave activity has fallen relatively close to a background level."

Mr Fry said the scientists did not yet know whether there had been any underwater landslides off the Kaikoura coast.