Junior doctors are planning another 48-hour strike in an ongoing row with employers over rosters. 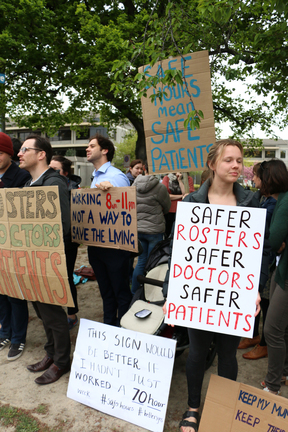 Up to 2500 junior doctors walked off the job at all public hospitals last month in the dispute over the rosters, which they said were unsafe.

DHBs said they made their fourth formal offer to the New Zealand Resident Doctors' Association (NZRDA) today, and expected it to settle the dispute.

However, the NZRDA said the DHBs' offer was "seriously deficient" in addressing its concerns.

It said the new offer today amounted to a net pay cut for the doctors of between $5000 and $7000, depending on their level of seniority.

"We have explained to the DHBs why their offer is not acceptable and made some suggestions as to how it might be improved, but they have been unable to respond to us in mediation today," NZRDA national secretary Deborah Powell said.

The DHBs said they were surprised their offer was rejected.

Their offer gave doctors what they had asked for, the DHBs said, and would mean no doctor worked more than four nights or 10 days in a row.

It also included a 5 percent pay rise over three years and an extra $200 for junior doctors when doing a weekend shift.

The 48-hour strike notice has been issued to begin at 7am on 23 November.