A methamphetamine dealer found with semi-automatic rifles and a lab inside a fortified warehouse has been sentenced to 12 years and four months in jail. 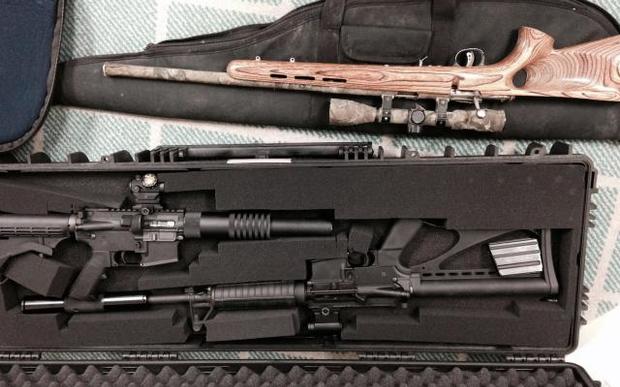 Some of the weapons found in Hannon's possession Photo: NZ Police

In the High Court in Auckland, Justice Toogood said police searched Hannon's apartment in March after a surveillance operation.

"You were found with two associates and you had with you a loaded 9mm pistol and a plastic snaplock container with recently manufactured methamphetamine."

A bank safety deposit box in the name of his partner contained more than $300,000 in cash.

Police then searched a factory in Wiri that was associated with Hannon.

"The entry points to the unit were found to be fortified and there were security cameras around the site. The unit contained a hidden room with a drug laboratory within it. 5.6g of methamphetamine were found there, as well as a loaded revolver, homemade pistol and ammunition," Justice Toogood said.

The police also went to a Takanini house where they found an arsenal of military-style semi-automatic weapons, including AK47s, hidden in the ceiling.

"The possession of loaded firearms is treated seriously by the courts. It's necessary to impose sentences which express society's condemnation of the lethal risk they carry," Justice Toogood said.

The judge said he had little information about the 38-year-old's background, which included previous methamphetamine convictions.

"Your mother, who continues to support you, says you were a successful jockey with great prospects until your career was brought to an end in 2003 when you suffered a serious head injury in an attack by somebody who was wielding a golf club."

Justice Toogood took time off Hannon's sentence for his early guilty pleas and noted that, with the help and support of his mother and partner, Hannon wanted to make changes in his life, including training to become a drug counsellor to help others.

The Crown has sought a court order to confiscate the cash and a vehicle belonging to Hannon under the Criminal Proceeds Act.

At the time of Hannon's arrest, Detective Senior Sergeant Lloyd Schmid said the discovery of the military weapons was alarming.

"Certainly the mix of firearms, drugs and clandestine laboratories is something we are well aware of and have come across in the past. However, the large haul of these military-style, semi-automatic firearms is certainly something I have never come across in my career before."