Swarms of jellyfish are keeping even seasoned swimmers out of the water at some of Auckland's most popular beaches. 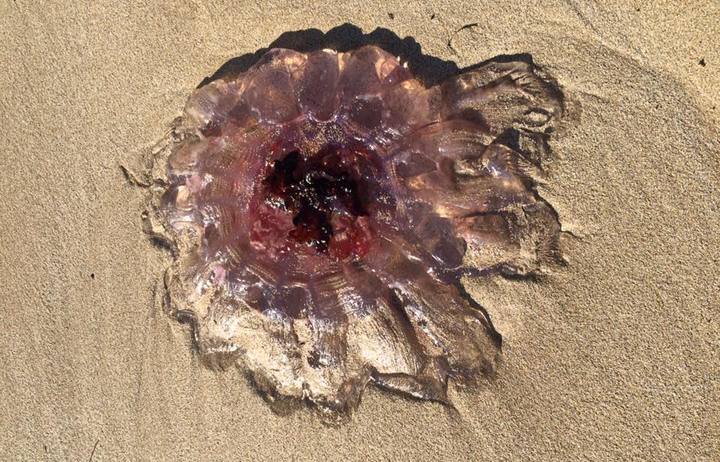 Over the last few weeks, large numbers of pink-purple jellyfish have been lurking in the shallows at beaches on the North Shore and along the east coast.

There have also been sightings at beaches in the inner Waitematā Harbour, around Waiheke and Great Barrier Islands, and as far south as Nelson.

Some of the jellyfish are as small as a thumbnail, while others are as big as a dinner plate.

Their transparent top, wart-like surface and mop of long pink-purple tentacles marked them out as lion's mane jellyfish, researchers said.

Devonport resident and regular ocean swimmer John Bevan-Smith said he had never seen anything like it.

"They have been so thick that when you walk into the water it's kind of like walking into animal soup."

Mr Bevan-Smith was part of a group of swimmers who usually hit the water at Narrow Neck Beach on Auckland's North Shore every Sunday.

But the infestation of jellyfish had put some of them off, he said. 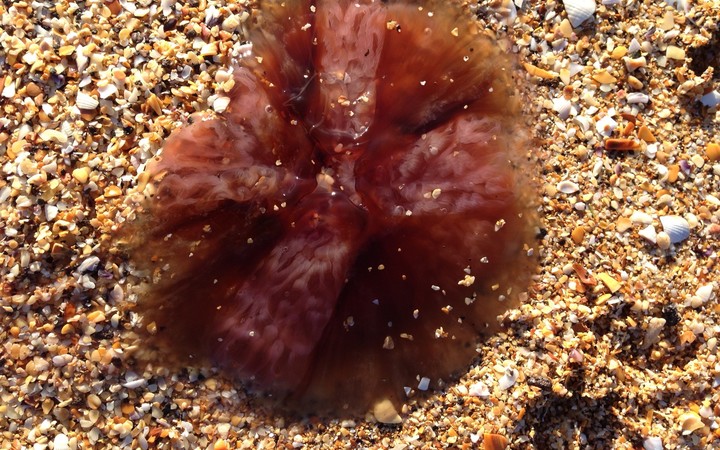 A jellyfish on Auckland's Cheltenham Beach - estimated to be 17cm across. Photo: Supplied / Mary Anne Evans-Frank

Another swimmer and Devonport local, Kate Lewis Kenedi, said the swimmers' wetsuits only saved them to a degree - many of them ended up being stung on their hands, feet and faces.

The jellyfish had been so bad some of their group had swapped the ocean swims for the fresh water of Lake Pupuke, or ended up swimming at the pool, Ms Lewis Kenedi said.

"This group has been active for seven or eight years, every Sunday, all year, and have never seen anything even remotely like this."

Jellyfish expert and NIWA emeritus researcher Dennis Gordon said it was normal to see lion's mane jellyfish all around New Zealand over the summer months. 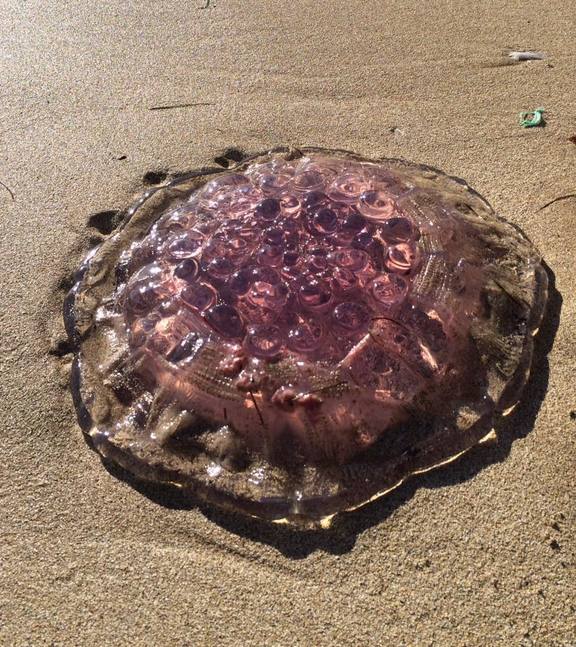 Beachgoers could be seeing more of them because of the impact pollution runoff was having on the marine food chain, Dr Gordon said.

And once they became trapped in harbours, there were not that many places for them to go.

"That's why you might see quite a number in Wellington Harbour or Hauraki Gulf, Marlborough Sounds - places where once they've been washed into a particular enclosed bay or something, they can't really get out."

If curious beachgoers wanted to, they could touch the top surface of the jellyfish - but should be wary of the tentacles, Dr Gordon said.

While their stings were not lethal, they could be very painful and, in serious cases, could cause people to go into anaphylactic shock, he said.

He has some advice for anyone unfortunate enough to get stung: "Just flush the stung area with lots and lots of salt water and that should do it."

"Some people recommend vinegar and in cases where there's no vinegar around and you're in a private place, I'm told you can urinate on it and that should alleviate the sting."