A man who abducted and attacked a woman runner in Whangarei will spend at least eight years in prison. 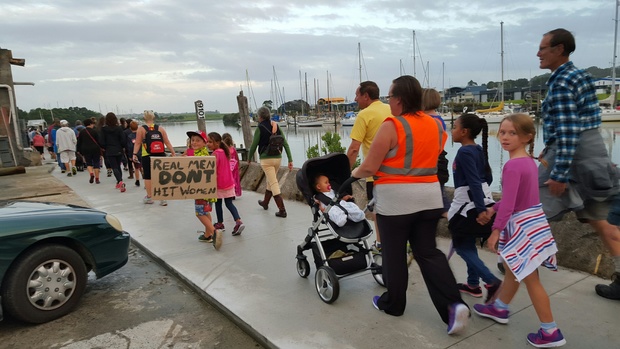 About 2000 people in Whangarei participated in a walk of support for the woman after the attack. Photo: RNZ/ Lois Williams

Haydn Christy, 40, was sentenced in the Whangarei District Court this morning on multiple charges, including sexual violation.

He had earlier admitted ambushing the woman on her early morning run on the Hatea Loop track in April.

The court heard Christy had addiction problems and had been using methamphetamine since his twenties.

He had crash-tackled the woman onto rocks, hit her around the head and face and threatened to kill her with a rock.

He drove her to his house, holding her head down, and subjected her to a prolonged sexual attack, while watching pornography on TV.

Christy then bashed her on the head several times with a brick and dropped her off in town, the court heard.

Christy's lawyer, Arthur Fairley, said his client was ashamed of what he had done and had apologised to the victim's family.

He said although Christy had assault convictions, for which he was deported from Australia in 2008, he had no record of sexual violence and his former partner and daughters reported no untoward behaviour.

However, Judge Christian Whata said the attack was predatory, a gross violation of the woman's sanctity and repugnant to the Whangarei community.

It had left the woman with serious ongoing effects, including blurred vision, headaches, and post traumatic stress disorder.

Christy's mother wept as the judge recounted the details of the attack and the woman's injuries.

Justice Whata noted Christy's very early guilty plea, but said the case against him had been very strong.

He said Christy had binged on P and was sexually pre-occupied and this had triggered a perfect storm of faulty thinking and rage - which he took out on an innocent victim.

He said the woman's statement was the most eloquent and informative he had read.

"This is a compelling narrative by an intelligent woman struggling to come to terms with what happened to her," Justice Whata said.

The effects had been traumatic: physically, emotionally and psychologically.

She was now reluctant to go for walks, and has had to leave Whangarei, where she'd arrived only a short time before the attack.

Justice Whata sentenced Christy to 12 years in prison with a minimum non-parole period of eight years.

In the wake of the attack in April, Whangarei women led a march around the Hatea Loop, and raised several thousand dollars for the victim.

The woman, who was in court for the sentencing, flanked by police officers and Victim Support, was composed and watched calmly as Christy was led from court.