Samsung has permanently ceased production of its Galaxy Note 7 smartphones after reports of devices it had deemed safe catching fire.

Spark said one of its customers reported the problem with their smartphone yesterday afternoon.

A company spokesman, Jason Paris, said the customer was unharmed and there was no damage to any property.

But Mr Paris said anyone with a Note 7 should immediately turn off their phone, remove the SD and SIM cards and return the device to any Spark store. 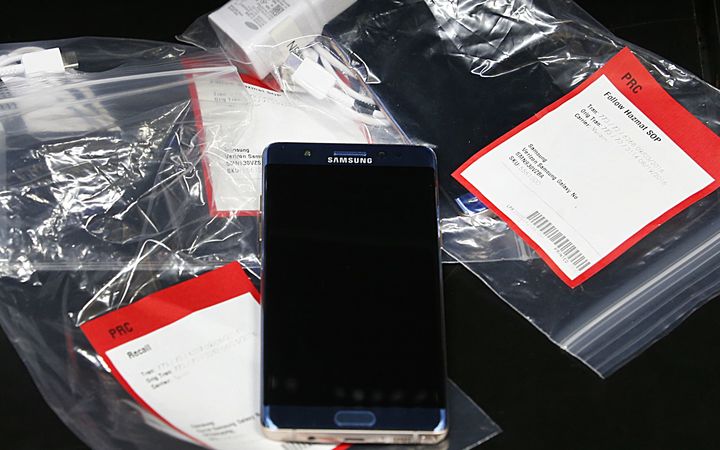 The original Note 7 had already been recalled, but the replacement devices also caused problems. Photo: AFP

The Note 7 model has been dogged by controversy since its release in late August.

The initial range was recalled and replaced after some phones spontaneously caught alight - but similar issues have plagued the replacements.

Owners are expected to be able to return the phones for a refund or an exchange for a different Samsung phone.

"We recently readjusted the production volume for thorough investigation and quality control, but putting consumer safety as top priority, we have reached a final decision to halt production of Galaxy Note 7s," the company said.

"For the benefit of consumers' safety, we stopped sales and exchanges of the Galaxy Note 7 and have consequently decided to stop production."

South Korea's finance minister had earlier warned that the country's exports would be hurt if the phone model was scrapped.

In September, Samsung recalled about 2.5 million phones after complaints of exploding batteries.

It later insisted that all replaced devices were safe.

However, that was followed by reports that the replacement phones were catching fire too.

A US man, from Kentucky, said he woke up to a bedroom full of smoke from a replaced Note 7, days after a domestic flight in the US was evacuated after a new device started emitting smoke in the cabin.

At least five fires were reported in replacement devices in the US.

Still, as late as Monday evening, a spokeswoman insisted the phones were safe to use.

Authorities in the US and South Korea are investigating why even the replacement Note 7 phones that Samsung equipped with a safer battery reportedly caught fire.

An official at the South Korean safety agency said the replacement phones might have a defect that was different from the problem with the original Galaxy Note 7s.

"If it's once, it could be taken as a mistake. But for Samsung, the same thing happened twice with the same model," he said.

"The reason consumers prefer brands like Samsung and Apple is because of product reliability. So in this case, brand damage is inevitable and it will be costly for Samsung to turn that around again."

Richard Windsor, from Edison Investment Research, said: "As a result of making a complete mess of the Galaxy Note 7 recall, Samsung is more likely to lose a large number of high-end users to other Android handsets rather than to Apple.

"The real issue is brand and reputation. As long as Samsung carried out the recall smoothly and kept users very happy, the issue would eventually blow over.

"Unfortunately, this is very far from the case, and the fact that Samsung appeared to still be shipping defective devices could trigger a large loss of faith in Samsung products."