A truck driver has been sentenced for killing a cyclist through careless driving, the second time he has caused a death in this way. 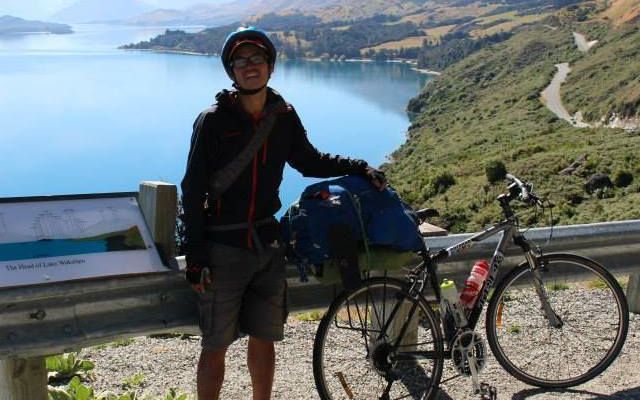 Cyclist Ming-Chih Hsieh died after a truck turned into his path at a busy Christchurch intersection. Photo: Facebook

David Connell killed Taiwanese tourist Ming-Chih Hsieh when he failed to check for cyclists and turned into his path at a busy intersection in Christchurch in 2014.

He crushed him beneath his B-train truck and trailer.

Connell was sentenced today to a curfew and 200 hours community work. He was also disqualified from driving for 12 months and ordered to pay $7000 in reparation to the victim's family.

It was the second time Connell had been found guilty of careless driving causing the death of a cyclist. He was found guilty of killing another cyclist, Stephen Avery, in 2005, after driving into him with his truck on the Kapiti Coast.

For that he was ordered to pay $2000 in reparations and disqualified from driving for nine months.

Stephen Avery's sister, Lesley Avery, reportedly said she was disgusted that Connell had been allowed to get behind the wheel of a truck again and had hoped he would be stopped from driving after killing her brother.

During today's sentencing in the Christchurch District Court, Judge Gary MacAskill said the truck driver had exacerbated the situation by coming to a stop over the point where he was supposed to halt at the intersection.

He also noted he had failed to wait to see if any cyclists were likely to emerge from the blind spot to his left before he moved off.

But in sentencing him today, Judge MacAskill rejected a police submission that Connell should be given a three-month prison term, saying Connell had shown remorse.

The judge quoted a line from the truck driver's probation report: "It eats away at me every day. I wish I could turn back the clock, but I can't."

The judge recommended an inquest be held into the incident and that this should look at the possibility of changing the regulations so cameras were mandatory on trucks with significant blind spots, such as the one driven by Connell.

He said if any good was to come out of the incident it would be changes aimed at ensuring the same thing did not happen again.

Mr Hsieh was cycling around New Zealand when he was killed.

His family, who travelled to this country to accompany his body back to Taiwan, said he loved this country and had extended his work visa so he could stay here longer.

In the months before his death, he had run marathons here and in Australia, swum with humpback whales in Tonga and stood next to an active volcano in Vanuatu.

In their victim impact statement, his family said the death of their only son was especially hard because of the Chinese custom in which the eldest child looked after their parents in their old age.

Lawyer Kerry Cook said his client accepted he should have waited to see if any cyclists emerged from the blind spot beside his truck.

But he said his level of culpability in not giving way was at the lower end of the scale.

He said his client was not presently working and that $7000 was the most he could afford.