Junior doctors have recalled falling sleeping while driving and giving patients the wrong medication as they prepare for strike action planned over long work hours. 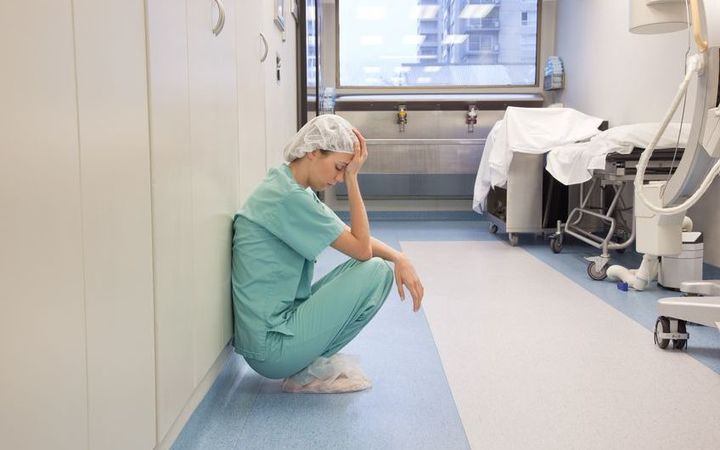 A union survey found 1182 doctors had made mistakes at work due to fatigue. Photo: 123rf

More than 3000 junior doctors at all 20 DHBs will strike for two days on 18 October after negotiations over their work hours broke down.

"I have fallen asleep at the wheel, thankfully very briefly, but I was woken up by the juddering lines on the side and that was actually on an afternoon, near the end of a 12 day stretch.

Dr Holford said he was sometimes rostered on for up to 16 hours, and had made drug errors on the job due to exhaustion.

"We make decisions about what medications to give and also when to escalate certain patients, and I've certainly made those errors.

"As you get further and further along your set of nights or on longer days, you're slower to think, you don't take in all the information, you're more likely to make simple mistakes."

Courtney Brown works at Wairarapa DHB and said she had made similar mistakes on the job.

Dr Brown said the hardest part was being less empathetic at the end of a 12 day stretch.

"It's harder to care, it's harder to be understanding, when your sole focus is to try and treat people safely."

A survey completed by Association members found 1182 doctors had made mistakes at work due to fatigue, and 275 had fallen asleep driving after work.

A spokesperson for the DHBs, Julie Patterson, said they had not been given access to the survey.

"We have no reports ... right across the whole country of any one of these incidents that the doctors have reported in the survey."

But she said DHBs were happy to work towards breaking the 12 days up.

"The issue that we've got as DHBs is the union is expecting that when the junior doctors have days off during the week either side of that weekend, that they will continue to get paid for the days that they have off."

She said that was not fair and reasonable, and the offer given by DHBs that the union yesterday turned down would have given doctors the best conditions in the world.

Ms Patterson said more than 100 extra doctors would be needed at hospitals across the country under changes being demanded by the junior doctors' union.

"We want to be able to sit at the table and be able to look the union in the eye and say that we do know what this actually means for us if we implemented their solution, and we're talking about upwards of 100 doctors."

She said the proposed strike action would impact planned elective surgeries and clinics.

"Things will be very safe for people who need to use the hospital services, the senior doctors, the nurses and the other professional groups ... will be making sure people stay safe."

All 20 DHBs expect to get lists of union membership for each hospital today.

They will then decide how much non-urgent surgery has to be cancelled, to make sure emergency patients get treated.

DHBs will also discuss pay for the senior doctors who will provide cover during the strike.