A former navy man's mission to reunite an Afghanistan veteran with his stolen medals proved successful when the owner was located via Facebook. 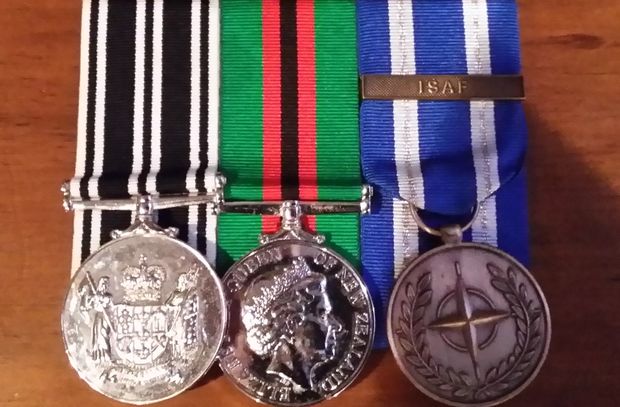 The stolen medals. From left, The NZ Operational Service Medal, the NZ General Service Medal 2002 (Afghanistan), and the NATO medal for the Non-Article 5 ISAF operation in Afghanistan. Photo: Supplied

Mr Kidd's wife spotted the three medals in an op shop in Auckland and Mr Kidd said she should buy them so he could find their rightful owner.

It turned out they were stolen during a burglary at Mr Chambers parents' house.

"My wife sent me a photo and I saw they were very recent medals," Mr Kidd said. "I thought, 'why would they be in an op shop?' So I said, 'pay for them and bring them home'."

Mr Kidd, who served in the Navy for six years in the 1980s, said he bought them to find their rightful owner.

"It's a thing between servicemen, we're comrades.

"You can steal my tv, but steal my medals? That's just so personal."

There was a name and service number engraved on the medals so he put the details on the Ex-RNZN Facebook page, asking for help.

In a matter of hours he was on the phone to the man the medals were awarded to, former Lance-Corporal Paul Chambers, who had done two tours of Afghanistan and now lived in Blenheim. They had been stolen during a burglary of his parents' house in Auckland in April.

Mr Kidd said former Lance-Corporal Paul Chambers was shocked and surprised they turned up, and told him he was forever in his debt.

Mr Kidd said he did it because of the comradeship among service personnel. 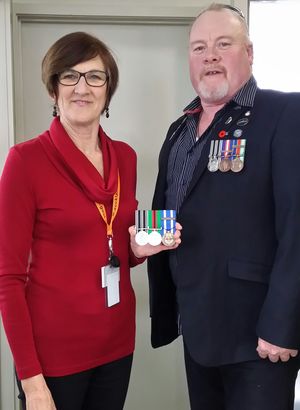 Mr Chambers served as a signalman and left the army in 2012. He was working in Australia when the burglary happened.

He said a man who had done basic training with him alerted him to the online search.

Mr Chambers went online and discovered messages from his army mates, who had seen the Ex-RNZN Facebook post and got in touch with Mr Kidd.

Mr Kidd delivered the medals back to Mr Chambers' mother, Christine, in Auckland.

"This was a part of our son's life that we were really proud of," she said. "He was so pleased to serve in Afghanistan - he said, this is why I joined the army, to contribute to something that had a purpose."

Mr Kidd was refunded the cost of the medals by the op shop manager, but said "the $75 I paid for them is irrelevant to what they mean to the person who risked their life for their country."

He urged people to be on the look out for medals in op shops.

"If anyone sees them for sale anywhere remember that someone served our country, somebody was willing to give their life for this country and these medals are recognition of that.

"They don't come easily. Maybe try and find the owner. The personal reward I got this was to see the look on Paul's mother's face and the tears in her eyes of joy and happiness and that is something you cannot buy."