A protest has been held outside the offices of the Canterbury Regional Council (Ecan) against what the organisers say is a lack of democracy.

In October, Cantabrians will get to vote for their regional councillors for the first time in six years, but some critics have said the new system is rigged, as six out of the 13 positions are government or Ngāi Tahu appointments.

About 30 protesters let the council know how they felt at an event today where a sculpture was unloaded at its front door.

Braving cold winds and unseasonable rain this morning, local artist Sam Mahon and his supporters unloaded a large plinth in front of the council's new offices in central Christchurch. 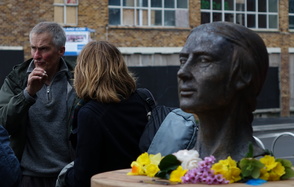 On top went a bust he had sculpted of his late friend, and long-time Ecan critic, Catherine Sintenie.

Like Mr Mahon, she was critical of the government's appointees, including David Caygill, for allowing large-scale irrigation and intensive dairy farming on the Canterbury Plains.

"Cathy spent all of her spare time fighting for rivers for 15 years and, at the end of 15 years, having followed due process and having negotiated with council in good faith, she said every promise made to her had been broken, and she died without any of those promises being fulfilled."

Mr Mahon was hopeful his sculpture would remain outside Ecan permanently.

"When David Caygill walks past this or Peter Skelton or any of the other appointees, any of the other of [Cabinet minister] Nick Smith's functionaries, they'll see Cathy and something small and withered inside them may stir ... It will resemble a conscience."

One of the protesters who turned up today, Ainslie Talbot, said the Ecan elections were rigged, because six of the 13 councillors would be appointees and the wards had been gerrymandered in favour of rural candidates.

As a child, Matthew Olykan used to swim in his local river, the Selwyn, but thanks to increased dairy farming in the area this was no longer possible.

He held Ecan responsible, he said. 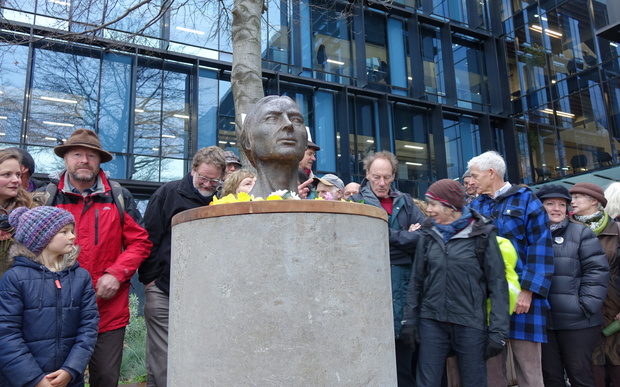 About 30 people gathered to protest what they said were undemocratic local elections. Photo: RNZ / Conan Young

"Ecan is supposedly, I would have thought, protecting the environment ... and they don't appear to be doing that.

"It's very one-sided, most of the people on boards are end-users, and really there should be a lot more diverse section of the population administering it and looking after our water."

Ecan chief executive Bill Bayfield came out from the council building to view the proceedings and invited the protesters into the building for a cup of tea.

He was equivocal when asked if Mr Mahon's sculpture would be allowed to remain on the forecourt.

"Certainly for the duration of Sam's event, it's welcome to stay there, it's actually on a public reserve, so it's not up to me to tell it to move."

Mr Bayfield said, as the chief executive, it was not up to him to respond to claims about a lack of democracy around the council table.

Voting packs have been mailed out and people have until midday on 8 October to send them back.