A Marlborough councillor at the centre of media leak allegations last year says he will not be bullied into signing a form to say he was not responsible for the latest leak. 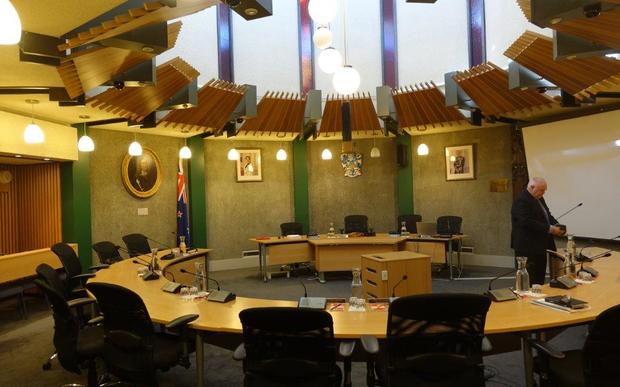 The council has started an investigation into a covert recording of a confidential council meeting in April, which was posted online this week.

Mayoral candidate John Leggett - whose closed-door comments about the financially troubled ASB Theatre were among the leaked material - says it is part of a calculated attack on his campaign.

RNZ reported this week on wider claims that candidates in Marlborough and Nelson were being targeted in apparent smear campaigns, after potentially damning material appeared on the blog Whale Oil.

The Marlborough Council's investigation includes a request for those at the meeting to sign a statutory declaration to say they did not record and release details to a third party.

Jamie Arbuckle is one of two councillors who have not signed the declaration.

The council said Jessica Bagge was the other councillor who had not signed, and that she was not present at the meeting where the conversation was secretly recorded.

Last year, the council sought a legal opinion over comments Mr Arbuckle made at a closed-door council meeting, after he challenged the process for appointing port company directors.

Mr Arbuckle said he was not responsible for the latest leak, and was making a stand against what he said was another witch-hunt.

There was no legal obligation to sign the document, he said.

"I am not signing any declarations - what law, bylaw or act is the council using to even demand such a thing? It seems like bullying to me.

"The major aspect is that we've already gone through one inquiry over public-excluded information being released when the finger was pointed at me."

Mr Arbuckle said the legal report completed last year prompted a private investigation he paid for himself, which he said revealed the source of the leak on that occasion.

A change of culture was needed, not just in Marlborough but around the country where councils too often "manipulated" documents to justify closed-door sessions, he said.

"Perhaps 90 percent of our meetings are held in public, but it's the meetings that have information that the public would like to know, such as the ASB Theatre running over budget, that get thrown into public-excluded [sessions], where only part of it should be."

Commercially sensitive material could be attached to an agenda item in order to hide it away, for example, but the reasons for projects going over budget and their current status should be made public, Mr Arbuckle said.

Mr Leggett - a Blenheim lawyer and two-term councillor - said he did not know who was behind the covert recording or its release.

He said the recording of the discussion breached the council's code of conduct, and its public release on the day voting papers were delivered meant it was an attempt to derail his campaign.

Whether or not the matter should have been in the confidential section of the meeting, there was a proper way to challenge that, he said.

"The topic of 'transparency' is now being deliberately used to distract attention away from the dirty politics and the dishonesty that is occurring in this election.

"A full investigation seeks to understand what has happened and who was involved. The fact that two councillors haven't signed statutory declarations is unacceptable," Mr Leggett said.

He said councillors had a joint responsibility to work productively together, and not to undermine their colleagues for political gain.