An inexperienced 20-year-old sailor has been found off the East Coast near Gisborne by an air force helicopter, Maritime New Zealand says. 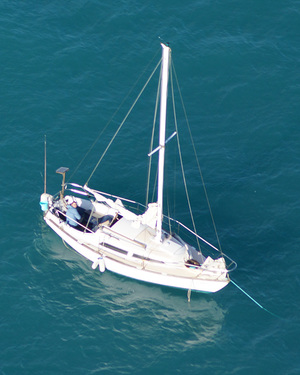 The yacht was earlier spotted by a search plane on Monday. Photo: Supplied

Seven-metre yacht Luna, which had earlier been reported missing from the area, was found 16km south of Cape Runaway about 3pm.

Rescue Coordination Centre spokesperson Vince Cholewa said the centre was frustrated the sailor had no working cellphone, radio or emergency beacon on board.

He said it was hoped police or Coastguard would make contact with him this afternoon.

The centre had said it was concerned the sailor, who last made contact six days ago, was heading into dangerous weather.

"Thankfully, the worst weather is now behind Luna and she should be in comfortable sailing conditions," he said.

"The skipper is inexperienced, left a vague trip plan, and seems to have had no working communications equipment since Friday last week. Even when two search aircraft located him he was unable to communicate his intentions or report on his condition."

Mr Roberts said the Coastguard will deliver a radio to the yacht tonight, and show the sailor how to use it.

He said boaties should always leave a detailed trip plan and take two forms of communication that would work when wet.

The vessel was previously last seen at Anaura Bay, north of Gisborne, on Monday, after leaving Napier on Friday morning.

The Maritime Radio Service had broadcast to all vessels in the area, asking for sightings of the yacht, and the helicopter was sent to search the area.

The skipper had told a friend he would call every 24 hours, but his last cellphone call was on Friday night.

Mr Cholewa said earlier that the police were first alerted on Sunday night and a search plane had spotted the yacht at Anaura Bay on Monday.

He said the skipper waved and appeared unharmed but not been seen or heard from since.

The man had been out on the yacht only once or twice, he said.