The issue has been one of the most contentious the council has dealt with and Ms Dalziel's main challenger, veteran activist John Minto, is standing on a no asset sales platform.

Last night Ms Dalziel decided to neutralise asset sales as an issue and waited until the end of the debate to drop her bombshell.

"The value of our assets has increased substantially since the time I've been in office. This means we can obtain cash from these companies without selling shares. It's that simple.

"And I can say not one single share in one single company needs to be sold to balance the books." 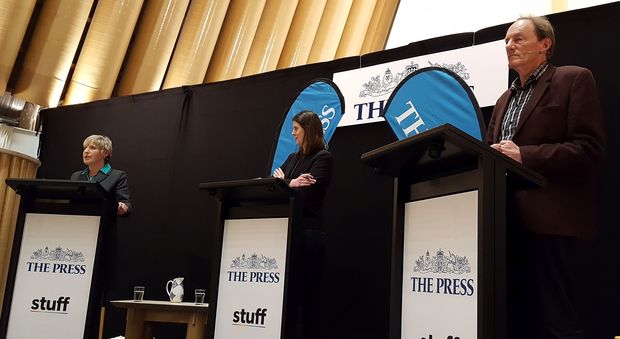 Earlier in the debate at the city's cardboard cathedral, Mr Minto painted Ms Dalziel as a big spending mayor who had allowed the council to be sidelined by the government when it came to decisions about the city's rebuild.

"All of those things are being done to create an enormous capital sum which will be spent on government priorities for the central city such as the rugby stadium and such as the metro sports centre."

Mr Minto said he would re-negotiate the $1 billion cost-share agreement with the government and pin rates rises to the rate of inflation.

"Our policy is to save money. We are the save money side of this equation, the current mayor is the spend side of the equation."

The council will decide on Thursday whether to chlorinate drinking water supplying up to 80,000 people in the city's north-west, due to a high risk of contamination.

The measure would be a temporary one while deeper bores are drilled.

Asked last night whether, given the water supply contamination in Havelock North, she supported treating the water, Ms Dalziel had this to say: "My personal view is that we've gotten away with it, we test every day, the risk is around the 24 hour period because the culture has to develop in that period, so you can't know whether it's got E coli.

My personal view is that we've carried that risk and I'm quite comfortable that we carry that risk for another six months."

Mr Minto was also against chlorination.

Voting packs have now been mailed out and results will be known on 8 October.