Foxton residents are up in arms over a plan to shift the town's cenotaph, describing the move as sacrilegious. 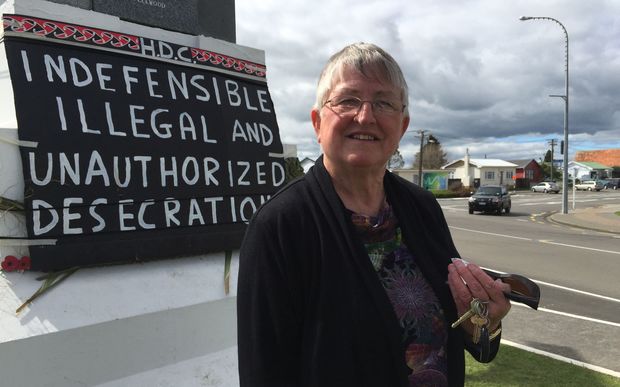 Protester Loma Betty, 73, said her husband's brother Eric was killed in Italy on active duty the day after World War II ended, and his name was on the cenotaph. Photo: RNZ / Collette Jansen

Some locals, including Māori, said they were so incensed they would stay on the site until the district council changed its mind.

They said they had not been consulted on the move.

A Horowhenua District Council spokesperson said the council would be moving the cenotaph 10m back to its original site.

Māori protest leader William McGregor disputed that it had ever been moved before, saying the memorial had been in the same spot since it was erected in 1920. 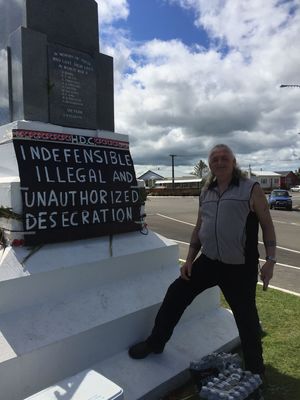 Mr McGregor said Chief Ihakara Tukumaru gifted the ground to the people of Foxton and said the cenotaph was on land that the leader had blessed.

"There is a mauri to that stone," he said.

Mr McGregor said Māori protesters arrived at 2am on Monday to stage a vigil at the cenotaph in a "Parihaka-style" protest.

He said they would stay as long as it took to get their message across, and were planning on staying the night if need be.

The Foxton RSA confirmed it did not support the move, despite the council's website claiming the group had no objections.

Local RSA president Anthony Tamahana said no-one seemed to know why the cenotaph was being shifted.

"Yesterday was the first time I had came across it, that something was going to be done. I wasn't aware it was going to happen yesterday, in fact I'm quite unsure in terms of where they are going to re-locate or move the cenotaph itself."

Protester Loma Betty, 73, said her husband's brother Eric was killed in Italy on active duty the day after World War II ended, and his name was on the cenotaph.

She said her husband - who, despite having dementia, was "still with it" - was very upset when she told him about the shift.

"He said 'but that's my brother, my brother's on that', and he got quite emotional."

Mrs Betty said it was sacrilegious the memorial was being 'disturbed' and it was part of Foxton. 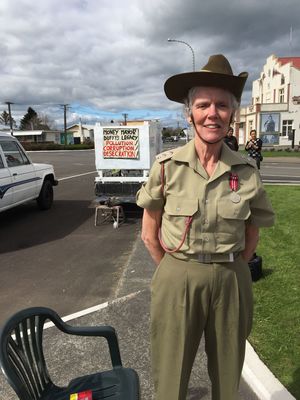 "You look up the main street and it is here. My little grandson comes down every year from Palmerston North, puts a poppy on and he salutes his great uncle."

Māori should have been consulted properly along with the rest of the community, he said.

"A lot of people don't want [the move] to happen, so there was a spontaneous gathering of people which has now turned into a mini Bastion Point.

"There's a major marquee being set up for accommodation and food because people no longer have a say. The elected people are merely ticking boxes."

Having served in the military, Vivi Deighton made a point of protesting in her uniform against the council's decision.

"I just think it's just sacrilegious that it's even contemplated - shifting a monument - particularly when there are people buried here."

The Horowhenua District Council directed RNZ to its website, where it said it had undertaken substantial consultation on the Foxton Main Street upgrade, including the cenotaph.

"It is important to also recognise that when the cenotaph was erected in it was contained within a memorial plaza area and surrounded by lawn, as a contemplation place and to honour the fallen."

"The Foxton Main Street upgrade will see the cenotaph relocated to once again be contained within a memorial plaza space, correctly placing it within its historical context."

The council said many conversations had been held with local iwi as part of consultation over the move, and they had indicated they were happy with the move.