Businesses in Havelock North lost out on nearly $90,000 in a week at the peak of the town's gastric illness outbreak last month. 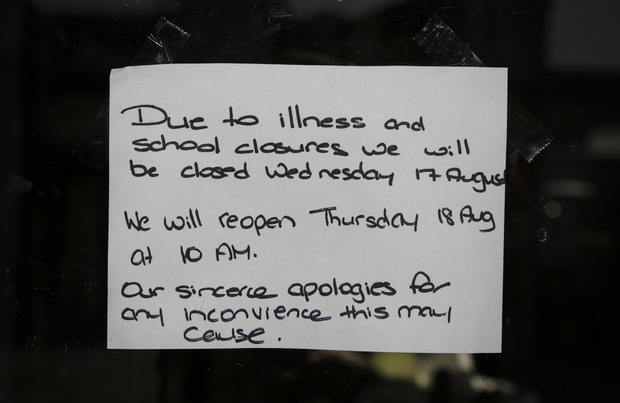 Shops in Havelock North had close due to illness and lack of custom during the outbreak. Photo: RNZ / Rebekah Parsons-King

EFTPOS figures have revealed spending at restaurants, hotels, petrol stations and other stores dropped dramatically in the town for the first week of the outbreak, compared to the same period last year.

More than 5000 people - a third of the town - were hit by gastrointestinal illness when Havelock North's drinking water became contaminated with campylobacter a month ago.

The Hastings District Council said it was still waiting for figures for subsequent weeks.

A $100,000 council assistance package, which would be matched dollar-for-dollar by central government, aims to help at-risk businesses recover, and provide rates remission for residents affected by the outbreak.

RNZ reported last week only one application had been processed, with "first-priority" cases unable to apply after Monday 12 September.

Those in less urgent circumstances could apply after 23 September.

Some business owners criticised the application process, saying they would need accounting help to apply and it would not be worth the effort.

However, nearly $17,000 has been paid out by Work and Income in civil defence and emergency grant payments to residents.

Meanwhile, the Hawke's Bay District Health Board said it was unaware of any more cases of Guillain-Barré syndrome caused by illness during the camplylobacter outbreak, after a woman was admitted to hospital with it late last week.