Protesters calling for an end to plea bargaining have marched to Parliament to deliver a petition. 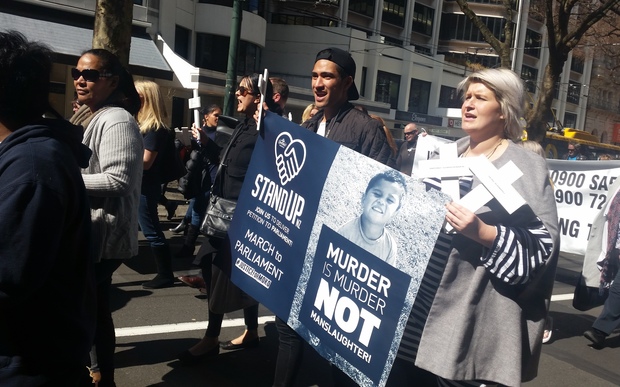 People carrying wooden crosses and a small wooden coffin walked down Wellington's Lambton Quay, yelling "enough is enough" and "this was not manslaughter" while holding pictures of Moko Rangitoheriri.

Moko, three, was bashed and kicked to death in Taupo last year.

His killers, Tania Shailer and David Haerewa, were convicted for manslaughter and sentenced to 17 years in prison in June.

There was a public outcry when the Crown downgraded the charges from murder, and thousands of people signed the petition that was delivered today.

The Sensible Sentencing Trust, which organised the petition, said it wanted to outlaw plea bargaining initiated by prosecutors.

Lawyer David Garrett, who is involved in the trust, said the trust also wanted a system where a High Court judge must approve the replacement of a murder charge with a lesser one.

"The petition asks that this shabby sort of dealing stops, that a High Court judge looks at it and says, 'Yes that's fair', and we take it from there."